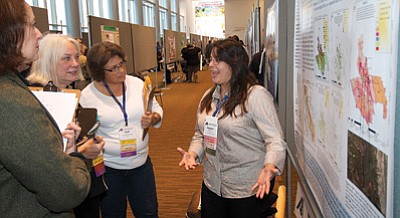 The resources will provide participating students with motivating encouragement, practical skills and intellectual experiences that will help compel them to stay in their chosen STEM field so they can earn the necessary academic credentials to land tenure track positions at universities.

The foundation is awarding $1.5 million over five years to the American Indian Science and Engineering Society (AISES) to start the pilot program, which is called "Lighting the Pathway to Faculty Careers for Natives in STEM."

"Lighting the Pathway is innovative because it will be comprehensive and national in scale and will provide many and varied types of support to American Indian and Alaska Native students," said NSF Director France A. Córdova.

Throughout the five-year duration of Lighting the Pathway, the project will be rigorously evaluated in order to help identify its most effective interventions. Because the results of such evaluations may help guide future decisions about investments in this and other projects, Lighting the Pathway may serve as a valuable model for programs preparing students of varied ethnic and cultural backgrounds for academic careers.

The need for the program

Evidence of the national need for Lighting the Pathway includes data from NSF's Science and Engineering Indicators 2014, which indicated that American Indians and Alaska Natives accounted for less than 0.1 percent of science, engineering and health doctorates employed in science and engineering occupations in American four-year colleges as of 2010.

Applicants to the program must be studying a STEM discipline - such as biology, computer science, chemistry, engineering, mathematics, geology or astronomy--at any academic level from the undergraduate level to the post-doc level. AISES will use its nationwide network to target American Indians and Alaska Natives for consideration for the project, but no one will be excluded from consideration based on their ethnic background. An AISES committee will select 30 students representing all STEM disciplines for the first year of Lighting the Pathway.

As a pilot project, the program is slated to last five years. During this period, at least 72 students are expected to be directly supported by the project.

Each Pathway student will receive face-to-face mentoring from a role model who is either an American Indian or Alaska Native or is familiar with issues relevant to these underrepresented groups and has earned a Ph.D - and preferably also holds a tenured faculty position. In addition, Pathway students will be offered research experiences and opportunities to present their research results at appropriate scientific conferences.

Also, Pathway students will attend monthly virtual seminars covering relevant scientific topics; academic topics, such as maintaining a good academic record and applying to graduate school; cultural topics, such as integrating indigenous cultures with Western ways; and career topics such as balancing career and life and writing resumes. They will also be trained in leadership and communication skills, and attend the National AISES Conference to network with Native faculty and participate in other career-boosting activities.

Pathway students will receive the most intensive training and support during their first two years in the project, and then receive continued mentoring for remaining years of the project.

The varied types of training and culturally sensitive support offered by Pathway and the project's use of the broad-based community provided by AISES, a well-established and engaged organization, will encircle each Pathway student with resources - both geographically and intellectually.

Because of the multidisciplinary nature of Lighting the Pathway, the project will be funded by multiple NSF directorates. These directorates are Biological Sciences, Computer and Information Science and Engineering, Education and Human Resources, Engineering, Geosciences and Mathematical and Physical Sciences.