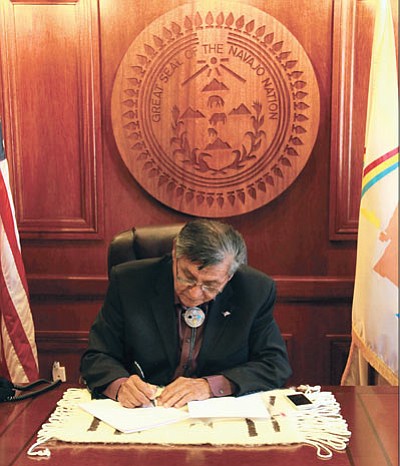 WINDOW ROCK, Ariz. - With a presidential veto of new legislation that changed the fluency requirement for tribal elected officials on the Navajo Nation, who is, and who isn't, a candidate remains in question.

Questions about whether presidential candidate Chris Deschene is fluent in Navajo hounded his campaign from the beginning.

Two opponents in the primary campaign, Dale E. Tsosie and Hank Whitethorne, filed the initial complaint against Deschene citing Navajo law that says anyone running for the presidential office must be fluent in Navajo.

On Oct. 28, President Ben Shelly vetoed the legislation that the Navajo Nation Council approved after five hours of debate just after midnight Oct. 23. Speaker Pro-Tem Lorenzo Bates broke the 10-10 tie in favor of the legislation. He stated that fundamental law talks about people choosing their own leaders.

The legislation still required Navajo Nation leaders to fluently speak and understand Navajo but allowed Navajo voters to determine what the definition of fluency meant at the ballot box. If Shelly had signed the legislation, it would have retroactively applied to the primary in the 2014 cycle and would have been in effect for the 2014 general election.

"The decision to amend the language requirements in Title 11, the Navajo Nation Election Code, must be brought before the Navajo people through a referendum vote," Shelly said. "This decision is far too important and it is one the people need to decide on. We are a nation of laws. I took an oath to uphold the law."

According to a statement released by Deschene's campaign, he has paused his campaign activity barring a legislative veto override or some other change in current circumstances.

"It is with tremendous pride in our campaign and disappointment with the President's veto, that the future of my candidacy is uncertain," Deschene said in a statement. "The Board of Elected Supervisors has firmly protected our fundamental right to choose our own leader. They have yet to change their position despite the [Supreme] court's position."

Election Supervisors Oct. 27 reaffirmed that the election would go on even while they were in consultation with Attorney General Harrison Tsosie about how to remove a candidate who is disqualified from the ballot, how to stop an election that is already in progress and what to do with absentee ballots that have already been cast.

The Navajo Nation Supreme Court on Oct. 23 ordered the election supervisors to remove Deschene from the ballot and postpone the Nov. 4 general election.

Council Delegate Russell Begaye, who came in third place in the primary, voted against the amended language requirement. If Deschene is removed from the ballot, Begaye will replace him and will campaign against former President Joe Shirley to be the Navajo Nation president.

On Oct. 8, Shirley's campaign said that it has refrained from commenting on the fluency question because it concerned Deschene and not Shirley.

Shirley's campaign did post that Shirley has gone before the higher court and has always respected its decision and would continue to do so.

"Navajo law says that speaking fluently in the Navajo language and understanding is a requirement," the Shirley campaign posted on it's website.

Shelly also said in a press release sent by his office that while the language amendments are a step in the right direction, other considerations must be taken into account, such as the possibility of a woman president and the language requirement for other offices, such as council delegate. He said this election cycle has been mired in debate and controversy around the fluency qualifications of candidates for elected office.

"Diné bizaad is sacred," Shelly said. "Navajo leaders should have both language and cultural fluency in order to be qualified. Every society has an obligation to hold onto their traditions."

He added that he believes the Navajo Nation must commit resources to ensure that Navajo children know and understand their language and culture.

Deschene said regardless of the outcome his supporters have stood by him and have carried themselves with calm and honor and that the Navajo Nation needed that to continue. He said it was too early to speculate about his future service to the Navajo people.

"Thank you for your contribution to the democratic process," Deschene's statement said. "Your voice needs to be heard. Vote. And let's walk together with pride and peace."