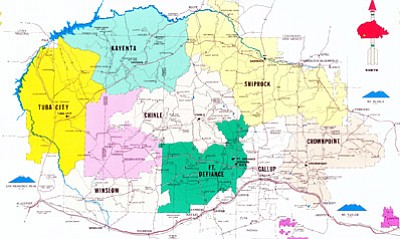 The Navajo Nation Council voted to amend the Navajo fluency rule to allow voters to decide if a candidate for public office is fluent enough. Map/NHO

WINDOW ROCK, Ariz. - After hours of debate, the Navajo Nation Council voted just after midnight Oct. 23 to approve legislation that changes the language requirement for Navajo Nation tribal offices, effective for the 2014 election.

The legislation still requires Navajo Nation leaders to fluently speak and understand Navajo but allows Navajo voters to determine what that definition means at the ballot box. The Navajo people can now vote for the candidate they believe is qualified to hold any position and who they believe is fluent enough.

Legislation Sponsor Council Delegate Danny Simpson urged his fellow council members to approve the measure to "let the people decide" if candidates are proficient enough in the Navajo language.

"This legislation does not take the fluency off - it's still required for the candidates of the Navajo Nation president and vice president," Simpson said. "This whole legislation is to protect the voting rights of our Navajo people and to let them decide who's going to be their leader."

Earlier in the day on Thursday, before the higher court's order, the Navajo Nation Board of Election Supervisors voted 8-0 to continue the election with Deschene on the ballot. The board was in executive session Friday morning.

At 12:18 a.m. Thursday night, Navajo Nation Council Speaker Pro Tem LoRenzo Bates broke the 10-10 tie in favor of the legislation stating when he looked at fundamental law it talks about the people choosing their leader.

"I understand the courts but it keeps going back to that, that people have the right to choose their leader," Bates said, adding that he understood the consequences of his vote and he voted green (yes).

Other council members were against the legislation, including Council Delegate Russell Begaye, the third place primary candidate, who would have been placed on the ballot if Deschene were removed.

"This session and hearing debate is interference with the court ruling," Begaye said.

The legislation in part said that the Navajo people have continually encouraged young Navajos to "climb the ladder" of education and to return to help the people after getting their education. However, many of them have had to leave the reservation to support themselves and their families. The loss of fluency in the Navajo language was one result.

The legislation referred to two prominent Navajo leaders who overcame a language barrier, Navajo Chairman Chee Dodge and Navajo Interpreter Jesus Arviso, who took a major role in the development of the Navajo Nation.

"During the time of Chairman Dodge and Interpreter Arviso, the Navajo language was the primary language; however as time progressed and the Navajo Nation has more interaction outside its boundaries, the communication is now in the English language, including our laws, regulations and rules," the legislation said.

After the vote, Deschene said he supports the legislation.

"I am very happy, very pleased and grateful that council has voted to pass legislation to support the people's right to choose their leadership," Deschene said.

He added that he believes the Board of Election Supervisors will make the right decision but a final outcome is still up in the air.

"They have been very supportive of protecting the people's right to vote to date. I think the message from the council last night was the council was also there to protect the people's rights in choosing their leaders and so I think you can make a parallel that is consistent," Deschene said. "What the final decisions will be is hard to tell without some other things like the presidents signature."

Ann Phillips, a member of the Navajo Nation, said Navajo children growing up on the reservation are told to do exactly what Deschene did - leave the reservation to better themselves, better the community and to get an education. And then return.

"As far as Deschene, he did that," Phillips said. "He is qualified. He's young and he has been out there. For me, for him to come back to the reservation, with an education, with a bigger look of the world, for his people. To me, that's qualified."

"He is a new generation - people are looking outside the little box," Phillips said. "We should give the guy a chance. We've all been there."