Leaving a lasting legacy
Museum of Northern Arizona President Dr. Robert Breunig to retire in June 2015, but not before leaving legacy of cooperation and communication with Native American tribes 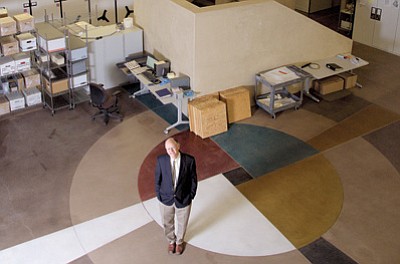 FLAGSTAFF, Ariz. - Perhaps the most important thing Dr. Robert Breunig has done during his tenure at the Museum of Northern Arizona (MNA) is to strengthen the ties between the museum and the Hopi, Zuni, and Navajo communities.

Breunig, who retires June 30, 2015, said historically MNA has had a strong relationship with Hopi, because of Hopi's proximity to the museum and the strength of its Hopi collections.

Leigh Kuwanwisiwma, director of the Hopi Cultural Preservation Office, said that history between the museum and Hopi dates back to the Coltons and their relationship to the Hopi.

"The museum, since its inception, has been really evolving over time around the Hopi," Kuwanwisiwma said. "One of the big events is the Hopi show, which has now expanded to other tribal shows."

Breunig said while the museum's relationship with other tribes is not as close, the museum is working to change that. Over its long history, the museum has worked to foster within its community an attitude of respect and engagement with tribal communities. One way they do that is through the museum's Heritage programs.

The Heritage programs provide a place where artists can sell their work. Breunig emphasized that there is another important component the museum has included that was missing before.

"That is called Heritage Insights, where we ask Native artists, Native scholars, people who have a traditional cultural knowledge, to come in and talk about language, world views, philosophy... and then we promote the concept of dialog," Breunig said.

Over the past five to six years, Breunig said the museum has developed a strong relationship with the Zuni. The museum brought back the Zuni Festival with its co-sponsor, The A:shiwi A:wan Museum and Cultural Center in Zuni Pueblo, New Mexico. The A:shiwi A:wan provides speakers during the festival.

"Our message to all tribal communities is that, this is a place in Flagstaff where you have a voice," Breunig said. "This is a place where we want you to tell your stories."

It is a new kind of message for many museums and one Breunig is carrying into the new ethnology gallery at MNA. Instead of telling stories about the exhibits from the museum's perspective, the communities tell their own stories.

"It's part in parcel of this philosophy of the museum," Breunig said. "It's a shift from the authoritative voice of the anthropological curator to, 'What's your story? What's your message?' That might not be immediately obvious but that's a huge shift in emphasis."

Kuwanwisiwma said it is that openness to seeing in a new way that gives him hope that the Memorandum of Understanding that he and Breunig signed to build a museum, and maybe a repository, on Hopi will happen.

This would be a big deal, Kuwanwisiwma said, considering there are collections in all of the big museums - Smithsonian in D.C., Field Museum in Chicago, the Peabody Museum in Boston, and the Carnegie Museum in Philadelphia - where ceremonial items that were taken under varying conditions reside. MNA has its own collections of items, too.

"Some were literally, as word began to [filter] out, simply taking from their holding places that were generally outside the villages," Kuwanwisiwma said. "Over time people found out where those places were and they took them. Without any kind of permission or notice, that's what we know happened and we know what some of those items were."

The question is where is the appropriate place for some of those items now? Kuwanwisiwma said the answer is complicated.

"Should they be in the museums?" he asked. "The cultural answer is 'no' but the security answer [is] 'probably' until such a time that we build a repository or the villages are equipped to return them."

Breunig said he knows some of the collections that MNA is holding and caring for will go back to the Hopi once they have a museum. MNA has a major collection that was given to the Hopi about a decade ago that the museum has been caring for that Breunig believes will form the nucleus of a really great collection.

He added that it is important for everybody that the tribal communities are able to have that capacity themselves and then for everybody to be able to communicate and share together.

"We may store some collections here for a time but there will be a time when they go back," Breunig said. "There will be opportunities with them to borrow things for exhibitions here. Just fostering that sense of collaboration is really healthy."

That sense of collaboration was on display when the Easton Collection Center was funded and built under Breunig's direction. It is an award-winning building and a Leadership in Energy and Environmental Design (LEED) platinum rated structure.

Before the facility was built, MNA's collections were stored in a substandard environment. Because of the large number of Native American collections, Breunig set up a Native advisory group to ask what the building should be, what it should look like and what it should feel like.

"It was really cool, consisting of people from Navajo, Hopi, Zuni, Yavapai, Apache and so forth," Breunig said. "Sometimes people emphasize the differences among the tribes, in this case it was consensus."

With a monetary commitment from MNA donors Betsy and Harry Easton, all those conditions were met.

The roof grows grasses and wildflowers. The rainwater is harvested. The front façade is Coconino Sandstone and is semi-circular. It faces east. It interacts with the seasons, there's natural light and it has a visual connection with the San Francisco Peaks.

Jim Enote, director of the A:shiwi A:wan Museum and Cultural Center at Zuni Pueblo, said at the dedication of the building that it was a monument and testimony to the spirit of a new age of collaboration with tribes as "source communities."

"This magnificent building, the surrounding views, and sacred landscapes evoke stories and imagination," Enote said. "The Center will be more than a storage facility. It will be a Mecca for tribes to visit objects that could be considered old friends and family."

And family is what many tribes consider Breunig. Kuwanwisiwma considers Breunig a family friend who has been sincere in respecting the Hopi people. Kuwanwisiwma said the feeling is mutual. He said that if the Hopi can get initial money for its museum that they will hopefully have Breunig as a technical advisor.

"Major things have happened since we hired Dr. Breunig," he said. "He's gonna be a special guy to lose from the museum. The relationship is not going to end. I can't afford to have it end."

Breunig will officially retire from the museum June 30, 2015. He will serve as President Emeritus after that.