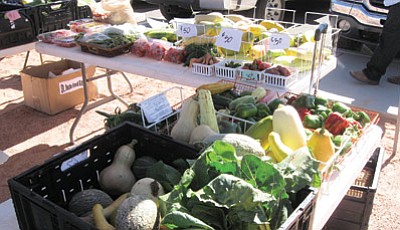 MOENKOPI, Ariz. - On Oct. 3 the Painted Desert Farmers Market celebrated its final market for the year. Markets took place in August and September.

Different organizations participated to inform attendees about different issues in the area and work that is being done. The Unity Through Sustainability group, a partnership between various businesses and services in the community to address food needs of the Tuba City area, puts on the Painted Desert Market.

The Moenkopi Developers Corporation, one of the sustainability partners, dedicates an area at the Legacy Inn to be used for events like the farmers market. The group has now opened the doors to the Learning Center, which is a space dedicated to continuing education about the importance of food agriculture, climate change and other issues.

The Learning Center will also be a place that can be used for workshops or classes.

"We have developed a knowledge base from elders who are masters of the tribes' agriculture from the Colorado Plateu and made a video to share with the people the traditional ways of agriculture and will be showing that in the center soon," Skrelunes said.

Nicki Jimenez from the Fort Apache reservation was on hand with a colleague from the Whiteriver Apache reservation to give information to the people about the Food Corps. Jimenez is a lead person for the Corps. They are working to bring information to schools about growing food and are working with cafeterias to start serving some of the produce grown in the edible school gardens.

In the Tuba City area, Will Conway from Connecticut and Alicia Tsosie are the new Food Corps members. Tsosie is representing the Grand Canyon Trust but is active in Tuba City area food sovereignty activities.

"We hope to expand our gardens and we have started an after school program that will bring in elders to teach the students different names of plants and teach traditional knowledge of planting," Tsosie said.

Conway has a college background, which will help in his work with the Food Corps. He looks forward to coordinating the Community Garden Project in Kerley Valley and will be putting on a meeting to plan for the next year's planting season. Conway also participated in a pickling demonstration sponsored by the St. Jude's Food Bank.

In addition to providing people in the area with food boxes, St. Jude's Food bank will sponsor monthly programs for the community to help people with different subjects like canning and pickling, money management, budgeting and other topics.

According to St. Jude's Director Sister Elizabeth, the organization wants to help by teaching people to be more self reliant and help them provide food for themselves.

"We hope to expand our garden next year and possibly look into purchasing produce from local farmers to put into the food boxes," she said.

Trudy Billy, director of the Food Bank, was selling vegetables that were grown at the garden. This year all the produce they sold was from their garden. According to Billy they plan to incorporate more traditional knowledge into their activities. She recently attended a conference in Seattle and gave a presentation. Billy was enthusiastic about the different programs other tribes have in place and hopes to incorporate some best practices through the Regional Food Systems group and the Unity Through Sustainability groups in Tuba City.

One vendor from the village of Lower Moencopi sold preserves that were made from mostly native fruits and herbs. Sandra Cameron makes preserves made from peaches, mints, grapes and other fruits that are native to the area.

"I would like to be able to harvest the fruit that I see growing on the Hopi reservation and preserve it since many times it doesn't get harvested," Cameron said.

Stephen Lomadafkie from the Moenkopi Day School garden was on hand selling produce that he said he has been experimenting with. He had for sale what he called "cool weather" plants like kale and red and green lettuce. He said those plants do much better in the cooler season. He hopes to try different things in the future. He would like to see more produce used in the cafeteria.

The participants in this year's Farmers Market finale were a representation of the growing awareness of the importance of agriculture and the need to maintain the traditional knowledge and incorporate modern knowledge to become more self reliant.