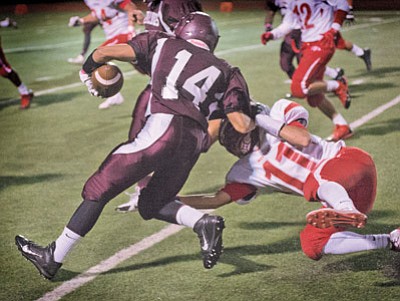 WINSLOW, Ariz. - The Winslow Bulldogs defeated the Monument Valley Mustangs 61-20 in Winslow Oct. 10. The win improved Winslow's record to 4-3 for the season and dropped Monument Valley to 3-4.

The game was never in doubt because Winslow dominated the Mustangs from the opening kickoff to the final buzzer.

The Bulldogs scored in the first minute of the game on a 52-yard run by Akkeem Foster. The conversion by Nick Marquez gave Winslow a 7-0 lead.

The next time Winslow had the ball they scored on a 29-yard pass from Rey Chavez-Velez to C. J. Chacon. The conversion gave the Bulldogs a 14-0 lead halfway through the first period.

Foster scored his second touchdown of the game on a 26-yard pass from Chavez-Velez. Winslow ran for the two point conversion but was stopped short and led 20-0 at the end of the quarter.

Foster scored his third touchdown early in the second quarter on a 67-yard punt return. Marquez booted the conversion for a 27-0 Bulldog lead. The next time the Mustangs punted Chacon returned the ball 54 yards for his second touchdown of the game. Marquez converted and increased the Winslow lead to 34-0 with most of the period left to play.

Monument Valley got on the scoreboard with just more than a minute left in the half on a 44 -yard pass from Joshua Young to Irwin Holiday. The conversion run failed and Winslow led 34-6 at the half.

Chavez Velez passed 10 yards to Marquez for a touchdown midway through the third quarter. Marquez then converted to increase the Winslow lead to 41-6.

Chavez Velez hit Darrien "Peanut" Brown on a 24-yard pass and Marquez converted to give the Bulldogs a commanding 48-6 advantage nearing the end of the third quarter. The fourth quarter started with Monument Valley inside the Winslow 10-yard line.

Joshua Young scored on a one yard quarterback sneak with still more than 11 minutes left to play. The two point conversion attempt failed and Winslow's lead was cut to 48-12.

Chacon scored again on a 50-yard run with still more than 10 minutes left to play. Marquez converted to increase the lead to 55-12 for Winslow. Foster intercepted a Mustang pass and raced 40 yards to score. The conversion failed but Winslow had a commanding 61-12 lead.

Monument Valley scored on a four yard run by Rivers Jones and Jerron Bitloy ran for the two point conversion that cut the Winslow lead to 61-20. That proved to be the final score.

The Bulldogs will play the Ganado Hornets on Friday in Ganado. The Bulldogs need to continue winning to ensure a favorable playoff berth. Winslow are favored to defeat Ganado and Chinle on the road and Page at home to end the regular season.