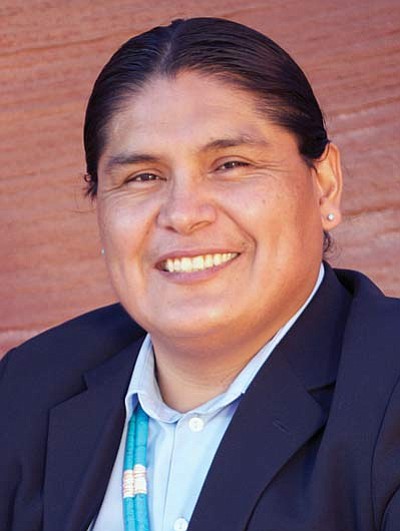 Navajo Nation Office of Hearings and Appeals Hearing Officer Richie Nez issued the default ruling against Deschene Oct. 9 because Deschene would not answer multiple questions put to him.

Nez said Deschene had five days to appeal the ruling to the Navajo Nation Supreme Court.

After the decision, Deschene issued a statement that said he will consider appealing to the Navajo Nation Supreme Court.

Two opponents in the primary campaign, Dale E. Tsosie and Hank Whitethorne, filed the initial complaint against Deschene citing Navajo law that says anyone running for the presidential office must be fluent in Navajo.

Deschene said in the hearing that he protested the questions as he has many times before and said that the fluency standard devised was made by a candidate who hadn't garnered enough votes to be a candidate for the presidency.

"This is an unfair standard," Deschene said. "This standard was devised by you and Mr. Whitethorne. This standard and its application is wrong."

Deschene said the test has never been given before in the "entire history and universe of the Navajo Nation."

"I protest and I object to your questioning," Deschene said, in response to questions during the hearing.

The Navajo Nation Supreme Court on Sept. 26 issued a ruling saying that the law that says presidential candidates must be fluent in Navajo was enacted to "preserve, protect and promote self-determination, for which language is essential."

The court said that as Dine, the Navajo people are the image of their ancestors and are created in connection with all creation and they are identified by their: Dine name, clan, language, life way, shadow, footprints and therefore they are called the Holy Earth-Surface-People.

"Different thinking, planning, life ways, languages, beliefs, and laws appear among us, but the fundamental laws placed by the Holy People remain unchanged," the court said.

They ruled that the requirement for fluency in the Navajo language is a reasonable regulation of a candidate's right to participate in the political system and there was no evidence to show that the law was intended to discriminate against the young person who may not be fluent and who may aspire to be a leader.

"We therefore reject Deschene's arguments to simply disregard the explicit requirement for fluency as specified in [Navajo Nation law]," the court ruled.

After that hearing, the Navajo Nation Supreme Court sent the matter back to the Office of Hearing and Appeals.

Absentee ballots with Deschene and former president Joe Shirley's name on them went out to the public Oct. 6.

Deschene encouraged people to still vote for him.

"My name remains on the ballot and voting continues without delay, as reaffirmed today by the Navajo Board of Election Supervisors in a majority decision," Deschene said.