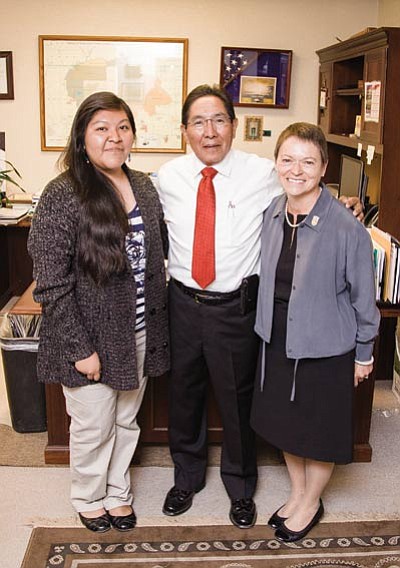 Chairman of the Hopi Tribe Herman Honanie said that the council and all those on Hopi were fortunate to have Cheng come visit, especially with all of her other responsibilities.

"To know that she came to the Northern Arizona Indian council," Honanie said. "I'm just happy and glad she is able to make it here... I think her visit to Hopi is the first. We've been looking forward to meeting her and we, of course, welcome her."

"So that's the foundation on which we can build," Cheng said. "But I know that along with this groundwork there are many things that we could do better. Many things we may have started but never achieved the level that we all desire."

Regent Luann Leonard said the Board of Regents has tasked Cheng with demonstrating strong relationships with each tribe and understanding the unique needs and obstacles to higher education faced by Native American communities. Cheng must present this plan to the Regents by Dec. 31, 2015.

"So she will be mobilizing her team to be able to work with the Native American communities and find out how they can best serve our community and help ensure our students succeed," Leonard said.

Honanie echoed those remarks and said he looks forward to increased collaboration between Cheng and Indian communities, tribal leaders and students, especially younger students as they prepare for higher education. He said there are many questions that Hopi children, and all Native children, must answer to succeed at school. Included are: How do I get educated? What do I need to navigate? How do my parents have a role in this? And what do we need with money and finances?

One of the students who was part of the NAU delegation visiting Hopi was Genell Pooyouma, who is Hopi and from Hotevilla on Third Mesa. She is a junior at NAU. She said Cheng's visit to Hopi was memorable, both for the Hopi and Cheng.

"I'm really excited for her. I feel like she's going to do great things, especially coming out to Hopi," Pooyouma said. "It's really encouraging for her to be the first president to come out here, it is really something."

She said that she had to answer some of the same questions that Honanie posed for herself and they are still some of the things she struggles with.

She said the Native American Cultural Center on campus has helped with that.

Other tribal council members mentioned they would like to see a Hopi sit as an advisor to the president and to build enrichment programs in local Native American schools.

Cheng said she has a lot to learn about the cultures and customs of Indian tribes she plans to visit. She said that NAU's history and national reputation is tied up with the success of Native Americans in higher education.

"I want to make sure we deliver on that promise," Cheng said. "Educated people are needed to advance the culture and economy of the reservations. Through education we can have people like Pooyouma come back and contribute."

Cheng will also visit other tribes in Arizona in the coming months.

Honanie said in three years he hopes that they can look back and see that progress has been made.

"It will be an awesome feeling to see that happen," Honanie said.