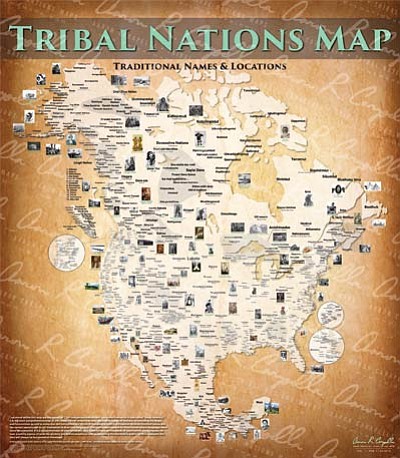 FLAGSTAFF, Ariz. - If there is one thing that Aaron Carapella has shown with his collection of maps of North America, it is that there were plenty of people already here in 1492.

Carapella's specialty is finding tribes' real names and locations and placing them on the map to show tribal history and to give a different view of who was really here and where the tribes were located pre-European contact.

With individual maps of the U.S., Canada, and Mexico, Carapella has now added a full size 55 inches x 49 inches map that includes all of those places, which he said was a challenge to make.

"It took literally months to go over it a few times," Carapella said. " I'm really glad it got to this point."

Carapella has worked on the maps for 16 years. He said he sometimes encounters people who say that Native people never used maps, they never mapped their nations and so creating the maps is a nonsensical way to approach Native American history.

"To those people I say, we also speak English now and drive cars, attend university," Carapella said. "To represent tribal names correctly when there's so much misinformation out there. I feel there has to be something to counteract the inaccurate information. Maybe this is one small way to do that. Natives are human beings and they like to see their people represented."

In addition to constantly updating his maps, which he does about once a month, he has also added more detail to the ones that already exist, like the original map he made of the U.S., which now includes at least 100 more tribes.

He also tries to fill in sub tribes for tribes like the Ute. Originally, he had only the traditional name for them and he placed them along the Utah and Colorado border. But he didn't have them broken down further into their traditional band names.

"Now that's there, where their bands were precisely at the time of contact," Carapella said. "I think it is important to include those too because even though the Ute tribe is divided up among two reservations, a lot of those families know which band they are from."

Carapella is thinking of creating a new map that draws out the territories of tribes to make a map of their homelands.

"Some tribes have very interesting translations for what they call their land. Sometimes it will translate to "The Creator's Land" or "The place of emergence" or something to that effect," Carapella said, " I'm kind of toying with that idea of having a map that shows that anywhere you go in the United States you wouldn't say "I'm on Navajo land." It would be named with the correct place name."

He said that a lot of tribes are taking on renaming projects, with mountains and rivers, where the native names have been taken away and given names of explorers.

"They're making maps that show before that name this is what it was called and this is what we still call it," Carapella said.

He is also working on lesson plans to accompany the maps so they can become teaching tools. He wants people to look at the maps, and other positive things that people are trying to do for their communities, as a way of breaking down stereotypes of Native people.

He said it is important to understand that Native people have a culture and a memory that goes back thousands of years, not that they have been alive for that long but there is a cultural memory that they've been here. He explained that the Hopi have likely been here for 20,000 years at the least and know they have been in the same spot for that long and were told that no matter what came and left that that is where home is to them.

"You are dealing with a culture that believes that versus Europeans, including most of my ancestors, who came here willingly and deliberately left their culture behind them," Carapella said. "Once you remove yourself off your homeland and you don't live there anymore, there's instantly a disconnect. There's great things about this country, but having a consistent culture influence is not one of our fortes, it's not something we do."

Beyond trying to help people understand the long history and culture of Native people, there is also sometimes controversy between tribes on where he has placed them on the map. For instance, the Navajo and Hopi have a long history of distrust toward each other.

Carapella said he deals with that in response to where he has placed the Navajo on his map.

"People have asked me, ok you have the Navajo on your map, but it's a pre-contact map," he said.

Many Navajos believe they have been part of Arizona, at least the Canyon de Chelly area, since time immemorial.

"When people ask me, 'well the Navajos aren't from there originally,' that's a conversation you need to have with the Navajo people," Carapella said. "Because my map shows where the Nations were when they had contact with the Europeans and that's where the Diné were at that time."

But he added that among his Hopi friends the view is different.

"They're like the Navajos are newcomers, they stole parts of our culture and the Hopi used to live down in the mainland too, and now we're just to the mesas and everyone thinks we live here," Carapella said. "I understand both sides of the argument."

said. "There are some tribes in Canada that if they talk to a Navajo person in their own language it's actually mutually intelligible, they can actually understand each other.

Carapella said if it is true that the Navajos came south from Canada, it's been at least 1,000 years since that happened, since they started their migration south.

"And to think that 1,000 years later, even if it's only eight or nine hundred years later, that they can still understand each other through language is extremely amazing," Carapella said.

He said that is one of the important aspects of the maps that he hopes others see, too.

"What I've learned from doing this map is how far the cultures were spread out and it's just interesting how everyone wound up where they were," Carapella said.