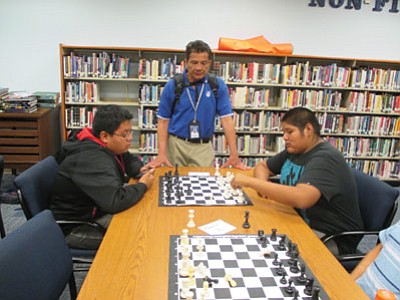 POLACCA, Ariz. - Kingman High School won the Hopi High School Chess Invite, but the Bruins were right behind them in second place.

"We did it ourselves," he said.

Jim, a senior, said the tournament had a good turnout with seven strong teams. He said the Bruins could continue to improve this season by practicing more.

Linarte said the highlight of the invite was that his players were excited that they placed second out of all the schools. He said his players' goals include having a positive attitude during practices and games.

"They would like to make it to state in November," he said. "They need more practice in order to improve every day."

Linarte said the Hopi High team leaders are the Fredericks brothers for varsity and Lim for junior varsity.

Linarte added he likes coaching because it helps the students' thinking, improving their academics and preparing for real-life situations.

"Our players took pride in having the tournament held here. They took pride in the Hopi Jr/Sr High School community. The cleanliness of the school was great," he said.