Tuba City Homecoming a cause for celebration in community 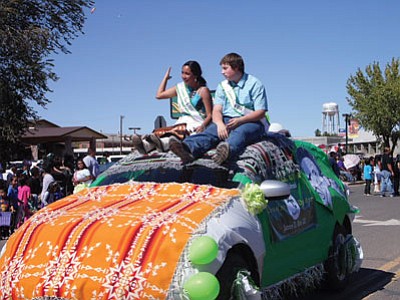 This year didn't disappoint. Community members, students and out of town visitors lined up in their lawn chairs, sat on the sidewalk and on tailgates of trucks or SUVs and shouted and cheered for their favorite hometown team, the Tuba City Warriors, with their forest green and white school colors blazing.

This year's parade theme was "Warriors Around the Clock." The parade lasted an hour and started in the Tuba City Junior High parking lot on uptown Main Street. The parade went past the hospital to the corner of Moenave Drive and then east into the Warrior Pavilion parking lot behind Tuba City High School. Student and teacher sponsored float entries were extremely creative in presenting a theme of around the clock Warrior action.

The day-long festivities were capped off that evening with a 63-0 win for the Tuba City High Warriors over Many Farms High on the football field.

The halftime homecoming royalty ceremony included the crowning of this year's homecoming queen and king. The 2014 Homecoming Queen was senior Shauntae Chee and Homecoming King was senior Bo Yazzie. The two were attended by their royalty court on the 50-yard line.

Former Native American studies teacher John Goatcher, who taught at Tuba City High for 35 years and retired a few years ago, was the parade Grand Marshall this year.

Goatcher and his wife, Maria, a teacher at Tuba City High and an award winning early childhood development specialist, raised their children in this Hopi and Navajo reservation community, blending their own bi-cultural talents to support their Native students who they have mentored and helped become successful in their academic careers for over 40 years.

The parade is a prime example of the cross-cultural cosmopolitan atmosphere that is fostered in this western Navajo agency town. Three tribes live closely together - Hopi, Navajo and San Juan Southern Paiute - along with non-Native families, who have come to work in Tuba City as service providers to the Tuba City hospital, Tuba City Western Navajo Bureau of Indian Affairs Agency and workers in the tourist industry. This community together supports their students in the Tuba City District.