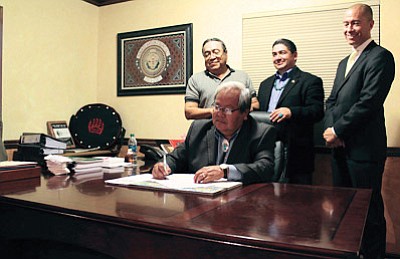 WINDOW ROCK, Ariz. - The remaining defendants in a criminal trial against Navajo Nation officials accused of conspiracy to commit bribery by taking money from the Nation's discretionary fund have all pled guilty before the Window Rock District Court.

Navajo Nation Speaker Johnny Naize, who was on administrative leave, pled guilty on criminal charges brought by the special prosecutor office and resigned from his positions on the Navajo Nation Council Sept. 29 and 30 respectively.

Naize resigned from his position as speaker of the Navajo Nation Council and as a council delegate Sept. 29. A day later he entered a guilty plea on charges of conspiracy to commit bribery before the Window Rock District Court.

"I have been privileged to represent the communities of Tselani, Cottonwood, Nazlini, Many Farms, Tachee, Blue Gap and Low Mountain," Naize said. "The progress made in my sixteen years of service as an elected official fills me with the utmost thanks

for the projects and improvements made for my communities."

In his guilty plea, Naize acknowledged that if he chose to go to trail instead of entering the plea, the Navajo Nation could produce facts sufficient to establish his guilt to the charges brought against him.

In court papers, Naize said he and other delegates exchanged benefits to each other in order to "influence and control their exercise of discretion in causing the disbursement of financial assistance money to each other and their families."

"In each of those cases, Johnny Naize authorized the payments with the understanding that those other delegates, would, in return, authorize the same amounts to Speaker Naize's family members," the special prosecutor's said. "[We] also filed criminal charges against each of the other council delegate individuals."

Naize may be sentenced to 0-90 days in jail, probation and community service and the court may request monetary restitution to the Navajo Nation.

In his guilty plea, George Arthur admitted that from 2006 to 2009 he authorized payments to Naize, Norman John, Elmer Milford, Teller, and Ervin Keeswood.

Arthur may be sentenced to no more than 180 days in jail, probation and community service and the court may request monetary restitution to the Navajo Nation.

Teller may be sentenced to 0-180 days in jail, probation and community service. The court may request monetary restitution to the Navajo Nation.

He may be sentenced to a period of no more than 180 days in jail, probation and community service and the court may request monetary restitution to the Nation.

Naize, who served as a member of the Navajo Nation Council since 1999, thanked the members of the Council, legislative staff and Navajo Nation President Ben Shelly for their service and assistance in helping the Navajo people.

"I wish him and his family the best as they move forward," Speaker Pro Tem LoRenzo Bates said.

The impacted chapters have 45 days to recommend an individual to fulfill the vacant position. According to Navajo Nation law, an appointment to fill the vacancy will be at the discretion of the speaker or speaker pro tem of the council.