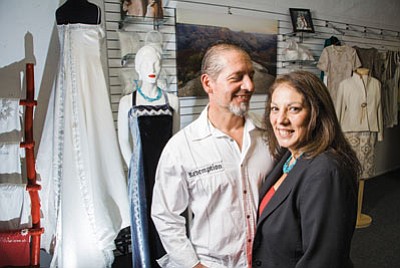 Above: Yvonne Chavez-Osorio stands with her husband Sergio in her store, Touch of Tradition, in downtown Flagstaff. Below: wedding dresses at Touch of Tradition feature Native American design elements like the one below. Ryan Williams/NHO

FLAGSTAFF, Ariz. - Yvonne Chavez-Osorio not only makes contemporary wedding designs for Native American weddings with a "Touch of Tradition," but has also created a place where Native American artists can display their work.

Her shop, called Touch of Tradition, opened originally in 2007 but Osorio's new store opened Aug. 1 in downtown Flagstaff. The idea behind the store and Osorio's line is to help brides and grooms who want a contemporary wedding to incorporate traditional Native American designs and ideas into their big day.

"I had a lot of Native American brides coming to me, but they were wanting something contemporary," Chavez-Osorio said. "That's where I came up with the idea of a contemporary dress."

The dress design is trademarked. Chavez-Osorio also uses her design in other items like shirts for bridesmaids or mother of the brides or ties for the men, pillows and flower girls baskets. She uses the Navajo wedding basket design used in traditional Navajo weddings.

In a traditional Navajo wedding a red, black and white basket is weaved that represents the Navajo emergence story and a map of life. The red represents the bloodline. Chavez-Osorio said typically if brides are getting married on the reservation, cornmeal is put in the basket and the bride walks up with her mother and father and they present it to the groom as an offering. Other family members share the corn meal, too. But she explained that if someone is not having a traditional wedding, a wedding basket is not used. She found that a lot of women want to incorporate the design, adding turquoise to their bouquet or putting the wedding basket design on their wedding cake.

"That's where I made the ring pillows and put the wedding basket design on the ring pillows so they could still come up the aisle in a sense," Chavez-Osorio said. "It's a kind of a touch of tradition without it being completely."

The important thing is that brides and grooms can do both, Chavez-Osorio said.

"You might have someone who is full blooded Navajo but they are marrying someone who is Anglo," she said. "That's where I came up with my idea to make something that would work for everybody."

In addition to everything one would need for a wedding, Chavez-Osorio's shop also features Native American artists who create everything from jewelry to music.

"A lot of the artists go to trade shows only, so they don't have [their work] in the store full time," Chavez-Osorio said. "This gives them an opportunity to have [their work] in here, on consignment. I'm not charging them to do it, yet it helps me, and it helps them to get their stuff out there."

More information is available from Yvonne Chavez-Osorio at (928) 853-8843 or on the Web at www.northernarizonaweddingplanner.com.