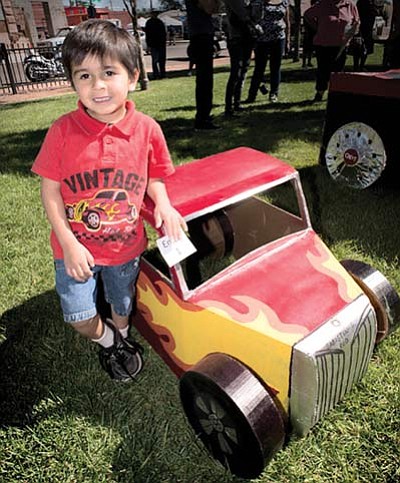 WINSLOW, Ariz. - The Winslow Just Cruis'n Car Club put on its 20th annual car show Oct. 3-4. Second Street in downtown Winslow was closed to traffic for the event. The show took place from 1 p.m. Oct. 3 until 3 p.m. Oct. 4 when the trophies were awarded.

Friday featured a poker run, "Cackle- Fest" (ear splitting dragster motors sounding off) and a burn-out contest on First Street where the object was to spin your tires for the longest time, usually ruining them in the process.

Judging took place on Oct. 4 while those in attendance admired hot rods from near and far. The show featured 180 car entries. Prizes were awarded in more than 30 categories giving everyone a good chance to take a trophy home.

Just south of the car show, a Head Start mini-cardboard car show took place. That included small versions of what the kids envisioned they would build for the year 2035 Just Cruis'n Car Show. Andy Lowery and the Just Cruis'n Car Club donated trophys for the kids.