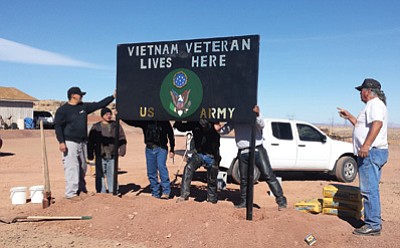 TUBA CITY, Ariz. - Signs honoring local Native American veterans are being erected around the Navajo reservation and hopefully in the coming year, a sign will go up on the Hopi side of the reservation as well.

Community members Sara and Lemual Adson of Tuba City say they wanted to "give back and show some appreciation for the veterans who have served not just in words but in action."

That is what prompted them to fundraise throughout the year to collect money for welding materials so that Honor signs made for individual veterans who live on the Rez could be erected in front of their homes to honor their service to the country.

Sara Adson is a Blue Star Mother with sons currently serving in the military. Her husband, Lemual Adson, is a veteran who served four years in the 4Th Infantry Division in the U.S. Army as a combat engineer. Both are now active participants in the Navajo Hopi Honor Riders organization.

Students from the Tuba City High advanced welding classes are also a big part of the Honor Sign design and creation and are under the watchful eye of their mentor and master teacher Ryan Goldtooth.

"It seemed that the ongoing conflict in the Middle East was becoming the new norm and many forget that there are Americans there everyday in harms' way," Sara said. "Some return home needing some type of healing and that was the original idea of the first Honor sign that was erected in Chilchitah Veterans Park in Vanderwagen, New Mexico. The second sign we had the students create was the one for local Tuba City Code Talker, Dan Akee.

"We had been losing many of our older veterans, including the Code Talkers and I wanted to lift our Grandfather Akee's spirit, letting him know we appreciate his sacrifice and service," Sara said. "We placed the sign in front of his house underneath his favorite tree, so he could watch his own his driveway. His family did a lot of yard work to clear the area for the sign and it looks wonderful there."

Goldtooth has taken the veteran sign project and made it a part of the students' coursework.

Steven Charlee, a junior and second-year welding student, is one of the Tuba City students who works on the veteran signs.

Charlee is the son of Lucinda Fowler and Byron Charlee in Tuba City. Charlee has worked on both the Marine and Army signs and has veterans in his own family, which gave him even more inspiration and motivation to make the sign extra special.

"I think at first, it was really all the military emblem details that were the biggest challenge for me to learn," Charlee said. "I had fun learning how to do MIG (metal inert gas) detail work, the cutting and then the machine feather and detail. It took me about a week to do the detail, the smaller cut out shapes. Three of us worked on the Marine sign but it was mostly me on the Army sign. I have learned so much from Mr. Goldtooth, he's really patient and shows us how to do a really clean job of welding, making sure that safety is first and also that we really understand how each weld must be secure and to go for high quality welding bead methods."

According to Sara, the latest sign is for Tex Walker, a U.S. Army Vietnam veteran and also the current Commander of the Cameron Veterans Organization.

"Tex and his family have always done so much locally for our veterans and also for the Navajo Hopi Honor Riders organization," Sara said. "During the recent sign erection event, Tex said 'This special veterans sign I received today is better than any medal I received from the government because this sign comes from the Reservation community and student hearts.'"

Goldtooth said the signs have inspired his students to work harder in their class work. The students are trying even more difficult welding techniques to be able to create more detailed designs since they know the signs will be visible out in the public area. That motivates his students to be more careful and thoughtful in their work assignments.

Each sign costs approximately $500 to build. Sara and her husband fundraise with the Navajo Hopi Honor Riders organization and their immediate family in order to create and give these signs to local veterans. But this cost doesn't include food or travel expenses for the Honor Riders who volunteer to install the signs at the homes of the veterans who are being honored.

Sara and her husband also ride with the Navajo Hopi Honor Riders, with Lemual riding first. After their sons enlisted, Sara found comfort in riding with them because the other military families who rode shared many of the same stories.

"Military families are really close and it doesn't matter if you are Native or non-Native, we share a lot of the same experiences and we don't want to forget the sacrifice and contribution our young men and women have made to our country," Sara said.

Donations can be sent to the Navajo Hopi Honor Riders organization through their website at www.navajohopihonorriders.com.