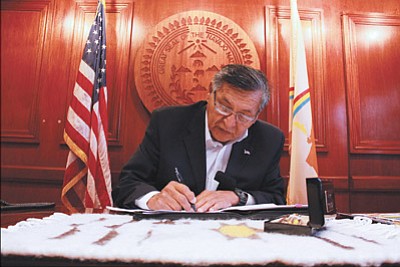 His decision to enact Legislation No. CN-54-14 and amend Title 24 of the Navajo Nation Code came after negotiations with council delegates and food advocacy groups to ensure the proper monitoring provisions were included.

Shelly originally vetoed the legislation citing concerns about the definition of junk food and the monitoring processes of tax collections. At the time, he called the Healthy Dine' Nation Act progressive and asked for further clarification.

"This administration has advocated for healthy living since we took office. Vice President (Rex Lee) Jim has run across this great Nation all four years of our administration," Shelly said. "Today, I am signing this legislation into law to continue our commitment to healthy lifestyles for our people. Diabetes is an enemy that we will conquer by fighting this war together."

Food with minimal-to-no-nutritional value will now have an added two percent sales tax.

The revenues generated from the sales tax can be used for community wellness projects such as farming, vegetable gardens, greenhouses, farmers markets, clean water, exercise equipment, health classes and more.

"From the bottom of my heart, thank you, Mr. President. I think we compromised on (the legislation)," Simpson said.

Denisa Livingston, a member of the Dine' Community Advocacy Alliance, said food is not only a material pleasure, but nourishment for our bodies, minds and spirit.

"Eating well is what will sustain and empower us for the generations to come. From this day forward, we will move from being a food desert and return to being a food oasis," she said.

Livingston called the signing a historical event and praised the president for his decision to enact the legislation.

"Again, you are leading the way, Mr. President, across the world and across Indian country. We thank you for your commitment, your leadership and your dedication to a healthy Dine' Nation. Ahe'hee," Livingston said.

Nez echoed Livingston's sentiments and called members of the Alliance champions who never gave up.

"Many of our young people out there don't have the tools to make the healthy and wise decisions on living more healthy and active lifestyles," Nez said. "Again, you're leading the way, Mr. President, across the world and across Indian country."

Deborah Cayedito, another member of the Alliance, said she was raised as a farm worker and understood the purpose of food.

"We are making historical movements and from the gathering of data that we've done, we can take it back home and start youth planters and teach them how to plant," she said