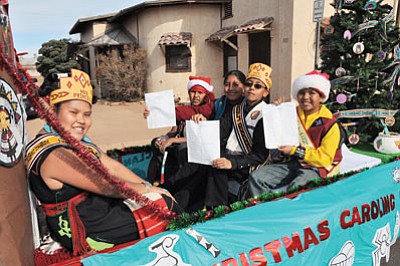 A group of singers from Hotevilla, Kykotsmovi Village and Second Mesa review the lyrics to three carols they planned to sing in Hopi. Photo/Betsey Bruner

The parade, one of the most colorful and popular events in northern Arizona, draws several thousand visitors to the town on the Saturday before Thanksgiving.

Last Saturday was no exception, as the near-perfect weather contributed to packed sidewalks and parking areas and a wild sense of excitement.

The theme for this year's parade was "Christmas Caroling Clans," and the route traveled down East Third Street, cut south at Colorado for one block and proceeded west on East Second Street to its conclusion.

Cpl. Chuck Hodge, of the Winslow Police Department, gave an estimate at 10,000 or more attendees.

"I don't know if we had a longer parade, but we had more people than last year," said Hodge, who added he has covered the parade for the department for 24 years.

"Last year, it was cold and misty, which probably kept a whole lot of people home."

Many folks from all across the Navajo and Hopi reservations, as well as Flagstaff, Holbrook, Payson, Phoenix, and almost every other area of the state, arrived well before the 1 p.m. start time for the parade.

They came not only to find parking, but also to visit with friends and family, enjoy the amazing selection of edible treats like mutton sandwiches, fry bread and green chili burritos, and to peruse and sometimes buy the wide array of items vendors offer for sale from baskets and jewelry to sports memorabilia.

According to the official judges seated at their table, there were 68 entries this year, 32 of which would be judged in various categories, including Sweepstakes, Mayor's and City awards, as well as winners in the military, walking, dance, equestrian, float (youth, commercial and non-profit), vehicle and band categories.

The Winslow Christmas Parade began in 1947 as a post-war effort to stimulate a flagging economy. Through the years, it has grown into a major annual event sponsored by the Winslow Chamber of Commerce.

"It's a beautiful day, a beautiful day, for our 68th annual Christmas parade," exclaimed Tom McCauley, current president of the Winslow Chamber of Commerce, who noted it was a moderate 58 degrees just before the parade start. "It's a wonderful way to kick off the holiday season."

He said his message for this year has been, "Shop Local," a motto that appeared on some of the floats.

In the staging area on West Second Street, where royalty reigned, participants made last-minute adjustments to their costumes, floats and musical presentations.

Tasheena Benally, 20, Miss Western Navajo, who was on float 67 with her co-royalty, Miss Teenage Leupp, Shearon Yazzie, 14, from Leupp, was being helped with make-up and other details.

"It's very exciting," said Benally, who is also from Leupp and a former Miss Southwestern Navajo. "It's good to see a lot of people come out to celebrate this parade."

"It feels great; it's an honor in the Hopi way," she said. "I've been to the Veteran Day one and our Homecoming Parade and this one. I have to keep my grades up, C or above, or else be ineligible for an event."

On an adjacent float, a group of girls, ages 3 to 19 years, wore matching blue outfits, fitting for contestants in the Navajo County Cinderella Pageant.

They competed in two pageants to get to this point, the state contest in June and a local contest in November.

Three of the smallest contestants huddled together underneath the Cinderella banner: Hailey Lerma, 3, Lexi Olson, 7, and Marisela Moyte, 7.

"I tumbled and hula hooped," said Marisela, about her contest skills.

In tune with the parade theme of "Christmas Caroling Clans," a group of singers from Hotevilla, Kykotsmovi Village and Second Mesa reviewed the lyrics to three carols, "Jingle Bells," "Up on the Housetop," all to be sung in Hopi, including "Jingle Bell Rock," or "Eyoyo, Eyoyo, Eyoyota."

Vendors had set up their stands well in advance of the parade.

Evonne Shelde, who is Navajo and Deerwater Clan, fashioned Christmas stockings in the form of mini-moccasins.

"I do this just during the holidays," she said.

Jovina R. Haskie, a Navajo vendor from Tuba City, brought a variety of baskets and jewelry to sell.

She said she first learned to make jewelry in an elective class in 1974 at Tuba City High School.

Vendor Chris Morris, a Navajo from Joseph City, had a display of finely-crafted bracelets and necklaces.

"This is probably my fourth year here," said Morris, who has been making jewelry for 20 years. "It's something I picked up from my aunts and uncles."

Savannah Soehrer, 17, was one of about 13 dancers in the parade from High Desert Dance Academy, a studio in Winslow that specializes in jazz, hip-hop, ballet and modern dance forms. She bought fry bread after the parade and commented on her participation.

"I like it, especially to be in it. It's a very good experience," Soehrer said. "I've been dancing since seventh grade."

By the end of the nearly two-hour parade, Winslow-style winds picked up, blowing remnants of the event, popcorn pieces, toy parts, candy wrappers and countless bits of paper, down the streets of downtown.

Families folded up chairs and blankets and made their way to cars and, if lucky, nearby homes.

With colder evening temperatures soon to come, the 68th annual Winslow Christmas Parade, except for the announcement of category winners, was one for the history books.