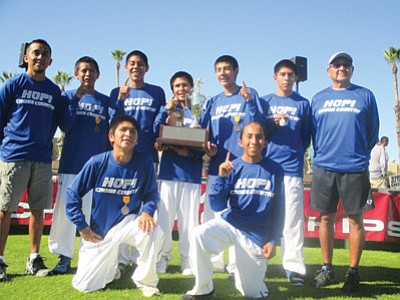 Hopi High packed three runners into the top ten and five runners into the top 19 to cruise to the national record championship with 42 points. Pinon was a distant second with 104 points, Glendale Prep grabbed third with 166, Many Farms finished fourth with 166; and Pusch Ridge took fifth with 224 points.

Adriano Joe from Pinon was the individual state champ with a time of 16:24, but after that Hopi dominated. Hopi's freshman Diome Talaswaima snagged second place with a time of 16:24. The rest of the championship team included Andre Lucas, sixth; Jason Laban, tenth; Keilan Poleahla, 15th; Adam Laban, 19th; Iverson Quamaintewa, 57th; and Slim Jackson, 62nd. There were 183 runners in the race.

Baker, who has become known as the Legend because of all his state titles, said every state championship has been great, but this one was special because it was the 25th.

"This was awesome because 25 years is a lot of years. It's a quarter of a century. It's a number to remember. It's beyond belief," he said. "When I first started out, I had no idea that we would win one title. Then the first title came and they just kept coming."

During the 25 years, Baker has become close with many of the other cross country coaches, so they were all calling, texting or tweeting him about the 25th straight.

Baker said he was surprised that the state race wasn't closer than the final score.

"We thought it would be about 30 points apart, but part way through the race we saw that we were up by 60-70 points. When we saw we had our top five in the top 19, we knew we were set," he said.

Baker said the Bruins ran better than their potential, but the season was not without its adversity. Last year's top runner Anfernee Howard transferred to Coolidge High School and two of the teams other top runners were kicked off the team for violating team rules. Howard finished second at state last year.

Baker said his runners performed well academically throughout the season, but there was some confusion going into the last week due to a computer glitch.

"It turned out they were all good to go," he continued. "We had late practices all year to make sure the runners would go to tutoring in order to stay eligible. We sacrificed practice time for them."

The Bruins will lose Polahla, Laban and Jackson to graduation, but the other four runners will be back, plus the Bruins have runners coming up from junior varsity and junior high.

Baker said the cross-country team didn't get much publicity throughout the season, but their scores were always on the Internet. He praised the fans, alumni and parents for egging the runners on during the state race.

"Some who live in the valley were glad they could come see us," he said. "We have a good support group."

Bruce Talaswaima from KUYI Hopi radio announced the race over the intercom at the finish line. Baker was glad that Talaswaima gave the crowd the Hopi perspective.

"In Hopi, we don't only root for Hopi. We root for everybody," Talaswaima told the crowd.

The streak of championships for the Hopi High girls ended when the Lady Bruins finished fourth. Some teams cheered when their team finished sixth or seventh, but Hopi always expects to finish on top in cross country.

Northland Prep from Flagstaff grabbed the girls state championship with 37 points, smoking the rest of the field.

Day was the only runner from Hopi to finish in the top 25. The other Lady Bruin runners were Stephanie Lamson, 26th; Sonya Sahmea, 49th; Ashley Haskan, 64th; Therae Day, 67th; Kaylen Lomayestewa, 91st; and Patty Sieweyumptewa, 99th. There were 138 runners in the race.