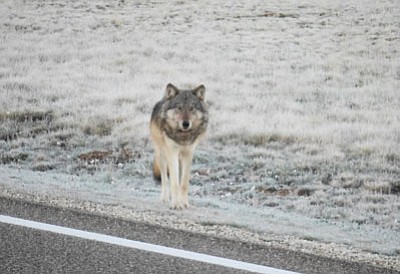 State and federal officials are trying to determine if this animal, which has been spotted several times north of the Grand Canyon this month, is an endangered gray wolf. The species has not been seen there since the 1940s. Photo/Center for Biological Diversity

FLAGSTAFF - Federal officials said Oct. 30 they are trying to determine whether a wolf-like animal repeatedly spotted in an area north of the Grand Canyon is an endangered gray wolf, as environmental groups believe.

A visitor to the area first spotted the animal Oct. 4. The animal would be the first gray wolf in that part of the state since the 1940s, if officials can confirm its species.

"It would be premature to say whether it is a gray wolf, a wolf hybrid or, least likely, a Mexican gray wolf," said Jeff Humphrey, a spokesman for the U.S. Fish and Wildlife Service office in Phoenix.

"That's where our immediate course of action is, to ascertain what type of animal it is," Humphrey said.

Officials at the Center for Biological Diversity, however, were not waiting for that confirmation. They said Thursday that the presence of the animal on the North Rim of the Grand Canyon points to the need for continued protection of the endangered wolf.

"What's striking to us is that the wolf has remained in the area," said Michael Robinson, a wolf advocate with the center.

The center opposes the current plan by the Fish and Wildlife Service to remove the gray wolf from the list of species protected under the Endangered Species Act.

"The latest proposal, which the agency scheduled to be finalized late this year, would eliminate protections for the Grand Canyon wolf and likely erase any chance it would be joined by a potential mate from the north," the center said in a statement released Thursday.

But an official with the Arizona Game and Fish Department called it a stretch to say the animal is on the North Rim, saying only that it has been seen in and around the Kaibab National Forest.

"We've known that there's been a wolf-like critter in the area for about three weeks," said Jim deVos, assistant director for wildlife management at the Game and Fish Department. "Determining whether it is a wolf or a wolf hybrid is critical."

The animal, wearing what appears to be an inactive radio-tracking collar, has been photographed several times since it was first spotted. But Humphrey said his agency needs to collect and analyze scat from the animal, to be able to narrow its species through the process of elimination.

"Based on photographs, it does not appear to be a Mexican wolf and its collar is similar to those used in the northern Rocky Mountain wolf recovery effort," Fish and Wildlife officials said in a statement.

DeVos said trapping the animal and removing its collar are priorities. He also said this animal appears less cautious around people than a typical wolf, and noted that there is at least one known wolf-dog breeder in the area.

In the meantime, federal and state officials said they are working to alert the public that there may be a wolf from the northern Rocky Mountain population in the area.

"Our primary concern is for the welfare of that animal," Humphrey said. "There's a deer hunt that is starting in the area, and Game and Fish is doing their noble best to get the word out to people to treat it as a fully endangered animal."