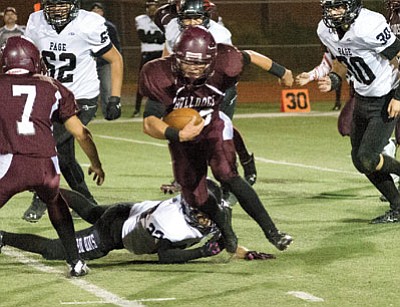 The Winslow Bulldogs’ C.J. Chacon breaks through the Page Sand Devil defense to complete a long gain on Oct. 31. The Bulldogs went on to win the game 52-14 to complete the regular season. Photo/Todd Roth

WINSLOW, Ariz. - The Winslow Bulldogs defeated the Page Sand Devils    in Winslow on Oct. 31. The win improved Winslow's record to 7-3 for the season and improved their chance for a favorable playoff berth and even a home game to start the playoffs. Page fell to 6-4 for the season but still could be a playoff team likely to open on the road if at all. The decisive win by Winslow may have ended Page's playoff hopes.

The Bulldogs got on the board without ever touching the ball. They scored a safety when Page centered the ball over the punter's head and out of the end zone. Winslow led 2-0 with the game just starting and with good field position on their first possession. Page got a break though and recovered a Winslow fumble just in Winslow territory.

Winslow got a pass interception by Dallas Jones who returned it nearly 50 yards into Page territory. They didn't score on this possession but had an apparent score by C. J. Chacon negated by a holding penalty. Darrien "Peanut" Brown eventually scored on a 30 yard run with less than a minute left in the first quarter. Nick Marquez booted the conversion for a 9-0 Bulldogs lead.

The Bulldogs recovered a Page fumble at the Sand Devil 12 yard line. Chacon scored on a two yard run. Rey Chavez-Velez passed to Akkeem Foster for a two point conversion and a 17-0 Winslow lead early in the second quarter.

Page drove to the Winslow one yard line but the Bulldogs defense came up with a brilliant goal line stand and took the ball on downs in the shadow of the goal post.

Winslow had an apparent touchdown run by Chavez-Velez negated by a penalty with just over four minutes left in the third quarter and a pass from him to Chacon. Chavez-Velez eventually passed 27 yards to Brown. The conversion by Marquez increased the commanding lead to 38-0. That was the score going into the final quarter.

Winslow had a threat early in the fourth quarter but had a pass intercepted in the end zone. The Bulldogs recovered a lateral in the Page end zone for a touchdown. William Parsons recovered the ball for the score. The conversion kick missed and the Bulldogs lead increased to 44-0. That score was enough to have a running clock for the rest of the game unless Page closed the gap.

Page scored on a two yard run by Andrew Runyan. Dana Smith booted the conversion and cut the Winslow lead to a still commanding 44-7.

Jalen Hayes ran 56 yards for a Winslow touchdown and then ran for a two point conversion and a 52-7 lead with still 4:35 left to play.

Runyan scored for the second time in the game on an eight yard run. Smith converted to cut the Winslow lead to 52-14 with just over a minute left to play. Winslow ran the clock out and walked off with an impressive victory.

The Winslow Bulldogs will host the Parker Broncs in the Arizona State Division IV Playoffs on Saturday, Nov. 8 at 6 p.m. Both teams come into the playoffs with 7-3 records. Winslow is rated eighth while Parker is ninth.