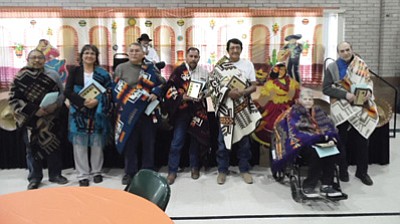 TUBA CITY, Ariz. - Each year the Tuba City Unified School District Governing Board honors and recognizes its employees by putting on a catered dinner and presenting awards to faculty and staff for their long term dedication to students and community.

Natalie Alfred, who works at Tuba City High School, will retire after 40 years of service. Alfred received a custom Warrior jacket to honor her years of dedication to her students and fellow staff members at the student academic awards assembly May 15.

Maxine Begay and Bernise Holliday were recognized for 35 years of service.

Phillip Giorsetti and Lucy Lamesa were recognized for 30 years of service.

Tuba City Unified School Board Member Lee Tsingine and Human Resource Director Adelbert Goldtooth gave out awards to all of the attending retirees, who received acknowledgement plaques and Pendleton blankets for their years of dedicated service.

"I want to thank and say how grateful I am for all of our hard working employees," Tsingine said. "It's good that we take the time to recognize all the contributions that our staffers make for our students. We really must let them know that they do make an impact every single day that they are here for our wonderful students and it's good to take this moment to show our appreciation."

The catered dinner was a Cinco De Mayo themed meal with James Bilagody providing entertainment and an invocation from Royd Lee.