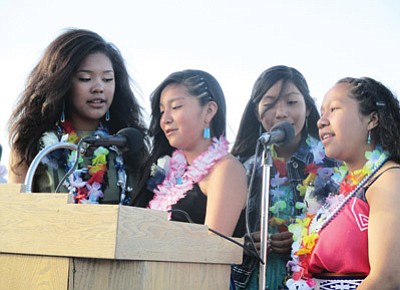 94 students were promoted at Bruins Stadium in front of hundreds of family, friends and educators.

Honanie congratulated the students before telling them their upcoming high school years will go fast before they go off to either college, the military or a job.

"Enjoy your four years," he said. "Time goes fast. It doesn't wait for anybody."

Honanie told the eighth grade students that success doesn't come from somebody else.

"You get to determine your own success," he said.

Honanie asked the students to hold hands with their classmates.

"Success depends on each and every one of you," he said.

Honanie warned the students that they will face peer pressure and should make sure they don't become academically ineligible if they go out for sports.

"For some reason that's a problem here," he said. "Don't be the one to drag your classmates down. Be the ones to boost them up."

He told the students they should strive to succeed whether it's academics, sports or their personal life.

"Realize your potential by testing yourselves, but also realize your potential as a class and realize what you can do for the community," he said. "Don't settle for being average. I had that problem. I was the leader of my respective sport, but I could have done so much more."

Honanie said when the students confront failure they should learn from it instead of letting it drag them down.

Honanie works as a car salesman at Courtesy Chevrolet in Phoenix. He is also majoring in marketing at Arizona State University so he can open up his own finance company to help Native Americans buy cars for themselves.

"Stay strong. Stay connected and be there for each other," he said.

Valedictorian Sean Bolus spoke about the eighth grade trip when his fellow students threw him in the deep end of the pool. The catch - he can't swim.

"I need to get a life jacket," he said. "All the school needs is an underwater valedictorian."

Bolus has made his mark in spelling bees, football, track, Talent Search and Close Up. He hopes to attend an Ivy League school to become a doctor.

Bolus moved here as a third grader from the Philippines. He thanked the community for their graciousness and thanked his classmates for being part of his life.

"Push yourself and make your mark," he said.

Salutatorian Kelly Johnson told her classmates that everyone attending the ceremony had helped the students. She said the students needed to challenge the "bahanas" whenever they had questions. She added she was also grateful to her teachers.

"Your moms and dads are proud. Look at their smiling faces," she said. "Challenge yourself to be the best you can be."

Johnson told her classmates to work hard and turn in their progress reports. She almost cried at the end of her speech. Honyouti told the crowd that it's okay to get emotional.