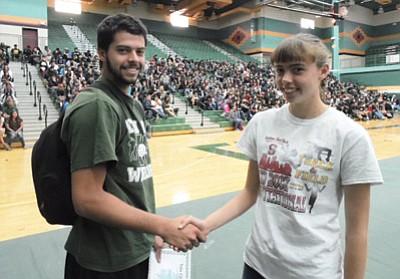 Manrique has earned some impressive academic statistics in the past two years and is active in the National Honor Society and the MJROTC Program at the school as one of its student officers. He was named one of 25 nationally chosen Stanford University Reischauer Scholars, one of 14 National Hispanic Recognized Scholars, and is a 2013-14 National Merit Scholastic winner for Tuba City High.

Manrique will attend the University of Arizona to major in neuroscience.

Manrique credits the Tuba City District and its high school for making him "independent, extremely resourceful and self-reliant" in finding information and research for his school work on his own, since Tuba City is located on the Navajo reservation and has limited library or research resources.

He also feels that his cross-cultural living experience has helped him overcome any social awkwardness and that will help him blend more easily into a much larger university setting. Manrique has lived in Alaska and on both the Hopi and Navajo reservation areas as he was growing up.

This year a brother and sister will be a Co-Salutatorian team on the podium for graduation ceremonies.

Wesley Loughran and his sister, state cross-country runner Brianna Loughran, tied with a final GPA of 4.35.

Brianna is 17 years old and will attend the University of Rochester in New York this fall.

Brianna is the current president of the National Honor Society at Tuba City High and is undecided about her university major. She is considering pre-med as her major in New York but would eventually like to transfer back to her home state of Arizona.

Brianna has lived her whole life on the Navajo reservation with her large Irish and German family, so blending in with other ethnic university students when she leaves Tuba City will "be a snap."

Loughran says her outstanding running record for Tuba City High taught her how to manage her time and how to organize her work so she could also get in practice time.

She credits Tuba City High teachers Thomas Jones and Raelynn McCabe with being her strongest education mentors besides her own parents.

Wesley Loughran will attend University of Arizona this fall. He was awarded a full Northern Arizona University (NAU) Lumberjack Excellence scholarship, but thought a university setting in Tucson might be more challenging.

Having been born and raised on the Navajo reservation gave Loughran insight into other cultures and helped him appreciate ethnic differences, which he says will make it easier to adjust to college life.

Loughran said teachers Thom Jones and Raelynn McCabe were his strongest academic mentors. He said their high school coursework was more at a college level of difficulty and helped him prepare for the more rigorous level of study he will be expected to maintain at college.