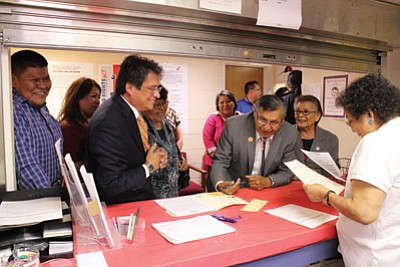 WINDOW ROCK, Ariz. - Navajo Nation President Ben Shelly filed papers May 16 to run for a final term as president of the Navajo Nation. He and Vice President Rex Lee Jim formally announced their run for a new term in back to back appearances at their respective chapters last weekend.

"It takes tough leadership to face the tough challenges," Shelly said as he filed for candidacy at the election administration alongside Martha, his wife of 49 years.

Shelly pointed out tough issues the administration has faced including range management reform, condemned government buildings, the water settlement, and the more than 75,000 feral horses.

"Let's put the skunk on the table because we are facing the tough ones, working together to resolve years of neglect," Shelly said.

Shelly said the Nation is working together to make change work.

"We are announcing our vision for a second term this weekend at our 'Road to Victory' rallies at Thoreau and Rock Point," he said. "We have made many tough decisions in getting the job done. We used the veto pen, for instance, to maintain a healthy balance in government savings. The people gave us the power to act responsibly and we have taken great trust."

The current administration's priorities over the last four years included health, education, economic prosperity, governance, and infrastructure. The vice president spoke over the weekend on progress made in health and education.

"We want people to know, early, we are a team," Jim said. "It takes a team to make a difference. We are ready as we seek another term to finish what we have begun."

The Shelly-Jim campaign began the festivities in Thoreau, New Mexico on May 17 with a special tribute to the veterans in observance of Armed Forces day.

On May 18, the Shelly-Jim campaign moved to the vice president's home chapter at Rock Point.

The deadline to file paperwork is May 28.

The filing fee for president is $1,500, tribal Council is $500 and the fee for the election board and the Kayenta Township Comission is $200.

To be eligible to run for president or vice president a person must be 30 years old and an enrolled member of the Navajo Nation, according to tribal law. The candidate must speak and understand the Navajo language fluently and read and write in English. The candidate must be a registered voter with no conviction of a felony or misdemeanor involving crimes of deceit, untruthfulness or dishonesty in the last five years. The candidate cannot have been indicted by a federal grand jury at the time the candidate files application to run for office.