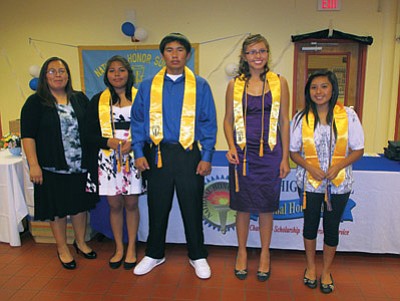 Katrice Puhuhefvaya, Raquel Manuelito and Josh Sidney were the honored inductees. They can aspire to be as successful as some of the NHS seniors who will graduate this year.

Kira Beaudette, president of NHS, won the prestigious Gates Millennium Scholarship and will major in medical sciences at Dartmouth.

Jennee Lomayaktewa, co-vice president of NHS, will major in pre-public health at the University of Arizona. She will start this summer by attending the New Start program.

Aeon Albert will major in business and accounting at Seattle University.

While these students are smart, they are much more than that because they have been involved in seven community service projects this school year while meeting the NHS ideals of character, leadership, scholarship and service.

Lavonne Adams, advisor for Hopi High NHS, said the induction banquet is one of the parts of her job that she enjoys.

"These are accomplished young individuals," she said about the inductees.

Puhuhefvaya said being inducted into NHS meant a lot to her because it showed that all her hard work has paid off. She said the induction ceremony was nice.

"It was different from National Junior Honor Society because there were fewer people," she said. "I was happy that Josh and Raquel were able to join me during the induction."

Puhuhefvaya said she looks forward to providing service to the community.

"I was so happy that my mommy was there because she is the main one who pushed me to get good grades," she said.

Alice Collateta is her mom.

Aside from getting good grades, Puhuhefvaya has been active in broadcast radio, cheerleading and gardening.

Adams said the students are role models who must possess the highest character.

NHS member Raicardo Jim served as the master of ceremonies.

Adams thanked the parents of the NHS members, but she also thanked her own parents as well as the administration and her husband Randy.