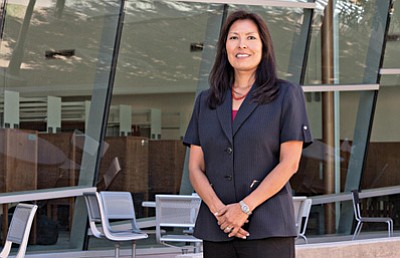 Diane Humetewa is the first Native American woman and member of the Hopi Tribe to become a federal judge. The Senate confirmed her May 14 with a 96-0 vote. Photo courtesy Arizona State University

FLAGSTAFF, Ariz. - The U.S. Senate confirmed the first American Indian woman and a member of the Hopi Tribe to become a federal judge May 14 with a unanimous vote after a lengthy confirmation process.

The U.S. Senate voted 96-0 to confirm Diane Humetewa as a federal judge. She will serve in the Federal District Court of Arizona.

Humetewa will leave her position at Arizona State University (ASU) where she served as special advisor to the president for American Indian Affairs. She also served as the chairperson of the ASU Tribal Liaison Advisory Committee and was a member of the provost's Native American Advisory Council, where she worked to promote higher education opportunities among Arizona's tribes.

During law school, Humetewa spent a semester working as an intern on the Senate Committee on Indian Affairs. After law school, she returned to D.C. to work on Sen. John McCain's staff on that committee - this time as deputy counsel. Her career at the Department of Justice included work as a special assistant to the Office of Tribal Justice.

In 2007, McCain recommended her for nomination as U.S. Attorney for the District of Arizona, where she served for two years. She was the first American Indian woman to be appointed as a U.S. Attorney.

"As a professor of practice in the Sandra Day O'Connor College of Law and special advisor to the president, Humetewa taught Indian law and worked to improve the retention and success of American Indian students at the university," a ASU press release said.

President Barack Obama nominated Humetewa to be a federal judge in 2013.

"I am honored by President Obama's and the Senate's belief in my capacity to perform this important responsibility and I will certainly endeavor to live up to their expectations," Humetewa said. "I've also been overwhelmed by and thankful for the outpouring of support I have received from family, friends and even strangers, throughout the Senate's confirmation process."

Alfred Lomahquahu, vice chairman of the Hopi Tribe, said the day was an historical one, not just for the United States "but for all Hopi Senom."

"We express our deep sense of joy and praise for Diane Humetewa's Senate confirmation," he said. "Diane is a true inspiration to all Native Americans, especially Native women across Indian country. Ms. Humetewa will complement the federal bench with her robust knowledge and her caliber of expertise she has acquired during the course of her career working to protect citizens across Indian country and throughout Arizona."

Navajo Nation President Ben Shelly extended the congratulations of the Navajo Nation to Humetewa and her family.

"All of Indian country should be proud to have a person of this caliber and experience on the federal bench," he said.

Humetewa was born and raised in Arizona. She began school on the Hualapai reservation and traveled throughout Arizona's Indian country with her father, who worked for the Bureau of Indian Affairs. She maintains close ties to her family and culture on the Hopi reservation.

Lomahquahu said that as the buzz and excitement of the confirmation travels around the country and tribal headquarters, he had a message for those in future generations who may follow in Humetewa's footsteps.

"Words of encouragement come to mind for our younger generation to emulate her path of success," he said. "With tenacity, dedication and perseverance, the possibilities are endless."

Humetewa received her Juris Doctor degree in 1993 from ASU's Sandra Day O'Connor College of Law and her bachelor's degree from ASU in 1987.