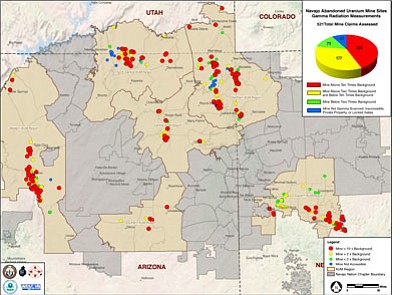 About four million tons of uranium ore was mined on Navajo land between 1944 and 1986. A report released by the United States Government Accountability Office said cleanup at the Tuba City Dump is behind schedule. Photo/EPA

WASHINGTON - A federal report on the status of efforts to clean up uranium contamination on the Navajo Nation released May 5 said while six objectives were met two were not met, including cleanup of the Tuba City Dump.

The United States Government Accountability Office (GAO) conducted the study and implemented the five-year plan after a hearing took place in 2007 that examined the adverse health and environmental impacts affecting the Navajo people after decades of uranium mining and milling around the reservation.

The report said progress has been made on the five-year plan to clean up uranium contamination mainly because more money had been allocated to cleanup than in prior years.

"From 2008 through 2012, EPA spent $22 million to test and replace contaminated houses, compared with $1.5 million spent in the preceding five years," the GAO report said.

The report said cleanup goals for the Tuba City Dump were not met because EPA's and BIA's estimated time schedules were optimistic and EPA officials added additional work that extended the time frames.

"BIA experienced project and contract management challenges in conducting work at Tuba City Dump and did not always follow best practices when estimating the schedule for assessment work at the site," the GAO report said. "Those challenges, if not addressed, could affect BIA's ability to meet future targets for cleanup at the site and successfully plan for project resources."

The report found that agencies have made progress in assessing contaminated mines, rebuilding contaminated structures, providing safe water supplies and cleaning up some high priority sites but challenges still remain.

"The pervasive uranium contamination on the Navajo Nation is an American tragedy," said Rep. Henry Waxman, ranking member on the House and Energy Commerce Committee. "GAO's report confirms that federal agencies have made progress in addressing this shameful legacy but that a huge amount of work remains to be done. The federal government has a moral obligation to sustain its commitment to right this wrong."

Agencies have yet to identity the full scope of the remaining work, time frame and costs to address uranium contamination near or on the reservation. Challenges in upcoming years, and for the next five-year plan, come back to money.

"According to EPA officials, funding for EPA's efforts at the Navajo abandoned uranium mines is expected to decrease from funding levels available during the 2008 five-year plan because of overall declining federal resources for cleanup," the GAO report said. "Further, agencies face challenges in engaging tribal communities, in part, because agencies have not always collaborated on their outreach efforts."