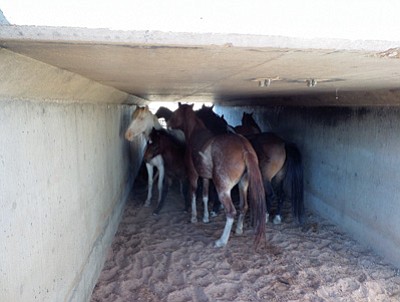 WINDOW ROCK - Navajo Nation President Ben Shelly announced that an agreement between the Navajo Nation and the Foundation to Protect New Mexico Wildlife has been completed to fundraise and secure resources for the Navajo Nation to use to start a feral horse management program.

Shelly negotiated the terms of the agreement with former New Mexico Gov. Bill Richardson, who is also co-founder of the Foundation.

"Working together to resolve challenges is our approach as we work with Governor Richardson and his foundation. They will give us funding and find more resources to reverse the population of feral horses," Shelly said. "We will continue to treat these animals humanely and implement the best solutions to our rangeland issues. We thank Governor Richardson and the foundation for working with the Navajo Nation in this most important effort."

He signed off on the memorandum of understanding (MOU) with Richardson and the foundation on April 30.

The agreement between the parties came after months of negotiations and discussions on the language of the agreement.

"This historic agreement is a great first step in our efforts to not only protect these horses, but to find humane and long-term solutions that are in the best interest of the Navajo people and their land," Richardson said. "I commend President Shelly for his commitment to this issue, and we look forward to getting right to work."

The foundation will work with the federal government, states, conservation groups, private parties, and foundations to identify resources for adoptions, triages, veterinarian services and sanctuaries.

The Navajo Nation agrees to make reasonable efforts to work with buyers offering humane alternatives to the transportation of horses to slaughter facilities.

The Nation will also work with the foundation to secure resources to implement the program.

The term of the MOU is one year from the date of execution, which will be announced in early summer 2014.

Richardson and actor Robert Redford will participate in a signing ceremony in Window Rock in the future. Redford is currently filming a movie and will not be available for the signing until early summer.

"Horses are sacred to the Navajo people. We have songs, prayers and ceremonies that are performed in their honor," Shelly said. "We will have a medicine man available during the signing to share our cultural perspective and relationship with horses."