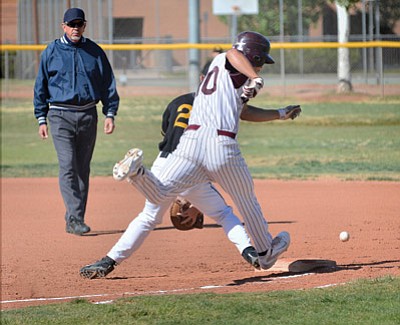 WINSLOW, Ariz. - The Winslow Bulldogs baseball team defeated the Round Valley Elks 12-1 in Winslow April 29 and the Snowflake Lobos 3-2 in Snowflake April 30. The wins left the Bulldogs with a 19-8 record and clinched the sectional regular season championship. The team will advance to the state playoffs with a favorable seeding.

In the 12-1 win over Round Valley, Colton Corum got the win working three innings and not allowing a hit, run or walk while fanning five. Jon Bollin worked two innings in relief and gave up one unearned run on one hit and two walks while fanning three.

Winslow scored two runs in the first inning, five in the second and five more in the fourth. Umpires called the game on the 10-run mercy rule after Round Valley, which had scored its only run in the top of the fourth inning, failed to score in the fifth inning.

In the 3-2 win over Snowflake, Kuster Kinlecheenie worked the full seven innings for the victory and gave up two runs, only one of which was earned, on six hits and three walks while fanning two.

Chacon led the Bulldogs at the plate with a two for three day. Cirre, Bollin and Sells were one for two. Corum was one for three.