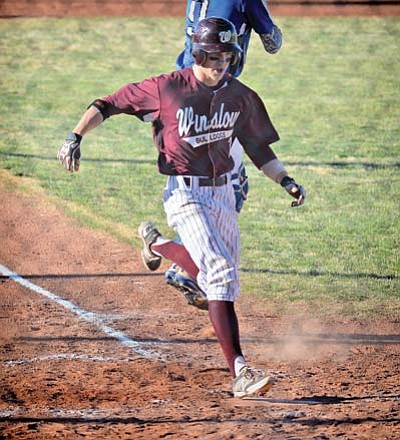 WINSLOW, Ariz. - The Winslow Bulldogs got an easy 13-3 win over the Camp Verde Cowboys in Winslow March 19. The win left the Bulldogs with an 8-3 record for the season.

The team played host to the Blue Ridge Yellowjackets March 25 after the Observer went to print before heading to Flagstaff to meet the Coconino Panthers on March 28.

Camp Verde scored a run in the first inning on a single, a double and a Winslow error. The Bulldogs plated nine runs in the bottom of the first on four hits, two Camp Verde errors, four walks and a hit batter. Corum had a triple, Jon Bollin hit a double and C.J. Chacon and Matt Cirre had singles.

The Cowboys scored an unearned run in the top of the second without a hit on a Winslow error.

The Cowboys cut the lead to 9-3 in the top of the third on two singles and an error but Winslow increased the advantage to 12-3 in the bottom of that frame on a hit batter and doubles by Corum and Cirre and a single by Bollin. A double by Corum and a Camp Verde error in the bottom of the fifth ended the scoring and the game on the 10-run mercy rule.