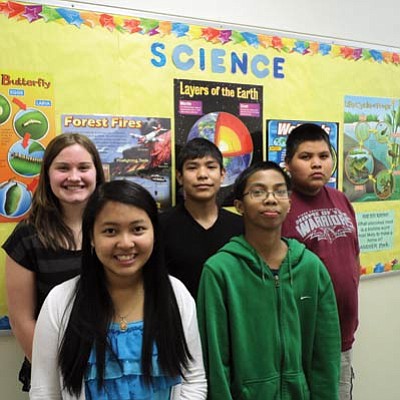 TUBA CITY, Ariz. - It was a two-tiered process for Tuba City District students to get to the final win at the Navajo Nation Science Fair this year.

First, students had to win in their own district competition to be able to compete in the multi-district K-12 competition in Window Rock, Ariz. Students from Utah, New Mexico and Arizona competed in the Window Rock fair.

One middle school student from Eagle's Nest Middle School in the Tuba City District will now move on to the Arizona State Science Fair competition in April.

Geronie Pesodas, age 11, is the son of Clarence and Genaro Pesodas. The family lives in Tuba City by way of Maryland. Pesodas has attended Tuba City District schools for the past three years.

Students from kindergarten to the high school level made innovative and creative science submittals with help from their parents, teachers or friends.

The winners from that competition then submitted their projects to the Navajo Nation Science Fair which had eight separate categories. All submittals were on public display at Red Rock State Park in Gallup, N.M.

The Navajo Nation Science Fair was a three day-long event with teachers, students and judges meeting each day.

More than 500 students from across the Navajo Nation, Utah and New Mexico from public, private, home schools and the Bureau of Indian Education (BIE) participated making the fair one of the largest student science fairs in the nation.

Tuba City Primary School Little Warriors usually only participate in the Arizona State Regional Science Fairs but this year, the staff and principal of Tuba City Primary wanted to challenge its students and science teacher sponsors to take on a higher level of competition - and they came out on top.

Fifteen students from Tuba City Primary participated in the event.