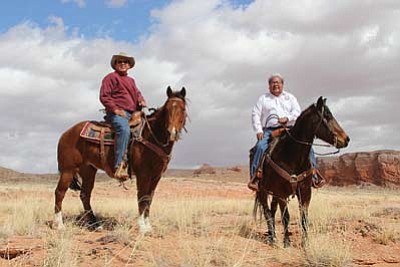 In 1966, Commissioner of the Bureau of Indian Affairs (BIA) Robert Bennett, ordered development stopped on approximately 1.5 million acres of land claimed by the Navajo Nation and Hopi Tribe. The tribes settled in 2006. President Barack Obama officially lifted the freeze in 2009.

Before a group of nearly 30 community members at Black Falls Bible Church, Naize said the former Bennett Freeze area is long overdue for development and improvement of homes and infrastructure.

"With over 8,000 Navajo people residing in the former Bennett Freeze area, it is time that we begin planning for the development and improvement of the area, especially home repairs, obtaining right-of-ways to begin utility lines, and improve roadways," Naize said.

Soon after the meeting with community members, Naize and Phelps continued from Black Falls into the former Bennett Freeze zone. Riding along the Bureau of Indian Affairs fence line, both delegates could see the needs of the area.

"Feasibility studies will need to be carried out," Phelps said. "Then we will have a good idea on the amount of funding this area will need to begin the process of improving roads, housing and infrastructure projects."

Phelps, who represents several chapters in the former Bennett Freeze area, said he would continue to advocate for additional support at the federal, state and county level to aid with roadway planning, design, and building.

Phelps added that any future construction of bridges over the Little Colorado River, which runs through the former Bennett Freeze area, alone would cost millions of dollars.

"In planning these infrastructure projects, we need to be realistic so they can be accomplished within the next five years," Phelps said.