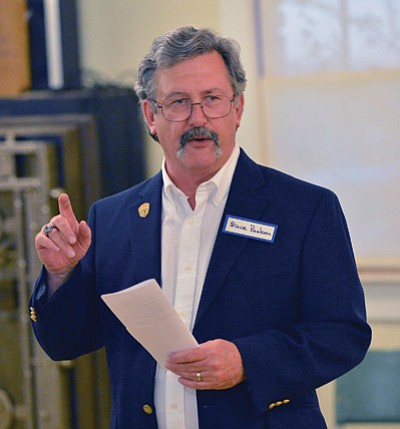 Winslow City Manager Steve Pauken speaks to Winslow Chamber of Commerce members March 7. The Chamber put on the group's annual mixer-dinner/officer installation at the Hubble Visitors Center at 5:30 p.m. New officers were introduced to attendees. At the next Chamber Board meeting members will elect a new board president. Pauken spoke about how he felt at home in Winslow and is enjoying his responsibilities. Pauken also outlined some upcoming enhancements to the city including removing or filling unused sign frames and putting on a city wide cleanup by residents. He also mentioned the city's purchase of 900 acres of industrial zoned land that will provide development space for any new industries interested in the Winslow area.