Students get first hand look at news and media industry 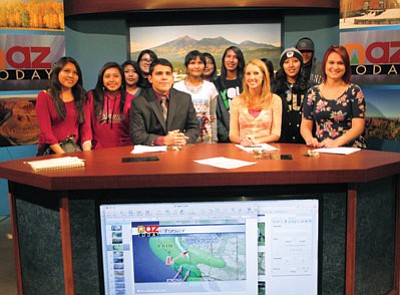 The students learned about print, video and radio journalism as well as photography. They also ate at both universities' cafeterias and experienced college life.

After an introductory meeting at NAU's Native American Center, the students broke into groups where they received training in radio, video and photography.

"We learned how they developed pictures. We went into an extremely dark room that had orange dim lights that you could barely see with, but our eyes adjusted after awhile," he said. "The dim lights protected the pictures from getting damaged because the pictures were light sensitive."

Kristen Russell, a sophomore, also enjoyed the photography section. She said the teacher didn't push the students yet he expected them to do the work and if a student needed help then he would help them.

Later in the afternoon, they watched NAZ TV students work on their performances. Then the Hopi High students had a chance to get in front of or behind the camera. Randi Lomayestewa and Jenee Lomayaktewa performed the on-camera work while the other Hopi High students worked the TV cameras or worked in the control room.

Russell said she enjoyed the TV broadcast because she and the other students had a chance to see what a broadcast is like behind the scenes.

"It is difficult to look into a camera and you can easily be frightened. It is also very hectic," she said.

Katrice Puhuhefvaya, a sophomore, went with the radio students during the breakout session.

"We got to go into the radio booth and stood in on live radio programs. It was awesome," Puhuhefvaya said.

Anthony Salazaar, a junior, had a chance to work the TV cameras.

"It was an awesome hands-on experience," he said.

Abby Yazzie, a senior, said during the tour of the radio stations they learned a lot, from the amount of shows that were broadcast to the involvement of radio in the community.

NAU broadcast teachers Dale Hoskins and Brandon Newman fielded any questions the students had. They emphasized that the NAU students were preparing themselves for real jobs in the media after they graduate. The students can also work their way through college at NAZ TV, the NAU radio stations or the NAU Lumberjack newspaper.

Canicia Weston, video editor at Hopi High, said visiting the college media programs was amazing and she was lucky to experience this hands-on work along with a couple of her peers.

"I liked NAU because it gave us a brief look at the media field," she said.

Kursheena Yazzie, a sophomore, also enjoyed her experience at NAU.

"NAU made me interested in radio production. I liked the vibe and movement of media. When I saw the control room, I was instantly hooked on media," she said.

Danielle Dewangyumptewa, a senior, said she learned from watching the NAZ TV broadcast that everything from operating the cameras to forecasting the weather is complex.

"The audience watching from the comfort of their home doesn't have a clue what goes on behind the camera," she said. "All the orders and directions the producers and floor managers give is head spinning."

Abby Yazzie, a senior, said it was interesting to see all of the different elements come together "as we watched a real live broadcast later that evening." She said the most fascinating part was watching the way the weatherman, Lee Born, performed in front of a green screen.

Quamahongnewa said he liked the fake accident because it had the students acting like real reporters.

Kursheena Yazzie said the mock car crash was her favorite part of the trip, but she was also happy to receive pointers on how to perform a standup video news report.

"When I did the standup, I felt confident about my little report. Writing a report on the mock car crash was really fun," she said.

Puhuhefvaya also enjoyed the fake car accident "because it was intense and dramatic."

The students also had breakout sessions to learn about broadcast and print journalism, but at ASU 19 high schools attended.

Dewangyumptewa said gathering the news straight from the site of an accident is pretty scary.

"You have to be forward with your questions," she said.

Abby Yazzie said during the mock car crash the students had to take photos, interview witnesses, attend a press conference and then write everything into a news report. She said that aside from the theme of journalism and reporting that the conference was promoting not driving while distracted, especially not texting while driving.

Radio personalities John Jay and Rich also spoke to the students at ASU about their careers in radio.

Yazzie said the speech by the duo was funny and oddly inspiring.

"John Jay and Rich were not the way I imagined that they would look," she said.

Yazzie also learned from moderator Richard Ruelas who writes for Arizona Republic and teaches at ASU.

"He made everything to the point," she said.