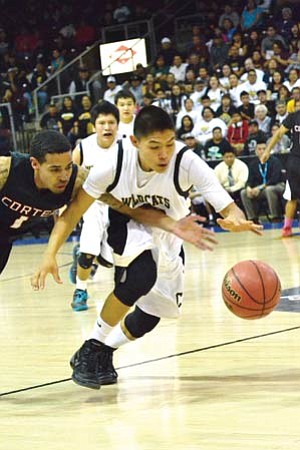 A capacity crowd comprised of fans from across the reservations witnessed fast paced, up tempo games played by Chinle and Tuba City. The crowd responded with a spirited cheer with every steal, every three-point attempt and every turnover forced by the Wildcats and Warriors.

The Colts scored the first two baskets of the game and led 4-0. The Wildcats answered with an 11-5 run for their first lead of the game. During the run, Sooner Brady scored in the paint, Wyatt Tuni added six points and Kevin Yazzie hit a three pointer.

Brady ignited another run, driving the lane for a lay in followed by back to back threes by Tuni and Ty-Martin Francisco. Francisco added a two-pointer and the Wildcats briefly took a seven-point advantage, 21-14.

From then on it was all Cortez as the Colts scored 11 unanswered points and led the game at the end of the first period, 25-21.

The Colts went on a 6-2 run and a 7-2 run taking a 38-25 lead with a little more than three minutes left in the second quarter. A basket by Yazzie, another Francisco three-pointer and two free throws by Yazzie kept the game close with Cortez leading 40-32. A 8-7 run by Cortez closed out the half giving Cortez a 47-40 advantage.

"We let them get away from us and we didn't knock down some threes in the first half, that we needed," said Chinle head coach Charles Gover. "That put us in a little bit of a hole, we climbed back into it and let them slip away, again."

The huge Chinle crowd erupted when Jimican Ranger and Brady opened the second half with three-point shots from the opposite corners, cutting the lead to a point, 47-46. Every time Chinle made a run, Cortez came back with a two, four or six point run of their own. They simply refused to let Chinle take control of the game. Three-point baskets from Tuni and Francisco plus a Brady free throw cut the lead to a single digit. The Wildcats trailed 65-64 at the end of the third period.

Cortez started the final quarter with an 8-2 run taking a nine point lead, 73-64. With 4:38 left in the quarter, Tuni and Francisco each hit three-point baskets to cut the lead to six points. Yazzie was fouled and hit two free throws, Francisco drove in the paint for a score and then Tuni hit another three-point basket that cut the lead to one point with three minutes left.

With the crowd on their feet, Francisco drove through the paint again and dished off a bounce pass to Tuni cutting along the baseline for two points giving the Wildcats an 81-80 lead with 2:42 left in the game.

With 2:08 left, Francisco hit his fifth three-point basket of the game, giving the Wildcats a two-point advantage, 84-82. The crowd, sensing a win, let the Wildcats know they were there for them with earth-shattering noise that filled Tim's Toyota Center.

The Wildcats had several opportunities to score in the remaining minutes only to have Cortez force turnovers and cause errant passes.

In the final two minutes of the game Cortez calmly hit five of 10 free throws and a two-point basket from Danny Cervantes to seal the win by a score of 89-84 advancing the team to the semi-finals game at Jobbing.com Arena in Glendale, Ariz.

"They got that early run in the beginning of the third quarter, it was fairly even from there until the fourth quarter," said Gover. "Then we were to make a run at them, we knock down some free throws and got to some threes to go down, we got some stops and some rebounds, then (we) made some mental errors at the end and they (Cortez) were able to capitalize on them, that made a difference in the game."

Gover continued, "Our kids didn't quit, they worked really, really hard there is no quit in them. They didn't want to lose and they fought very hard."

Tuni scored 26 points (four three-pointers) to pace the Chinle Wildcats, followed by Francisco with 19 points (five three-pointers), Brady with 17 points and Yazzie with 15 points. Octavius Holguin had a game high 29 points for the Colts.

Tuba City Warriors' Tristin Begay scored off the opening tip for an early 2-0 lead. Valley Christian Trojans' Brandon Haagsma and Cory Kasperson responded with a three-point shot each. The Warriors' Christian Begody and Alonzo Thompson scored after missed shots, which tied the game at six apiece.

Thompson's buckets started and ended a 6-0 run for Tuba City, giving them a 12-6 lead. The Warriors' Begody hit a three pointer at the buzzer to give Tuba City a 15-11 lead.

In the middle of the second quarter the Trojans scored 10 straight points giving the them a seven-point lead, 25-18, a lead they kept until the end of the game. The teams traded buckets through the end of the half with the Trojan still leading 27-20.

Tuba City Warriors head coach Ryan Brown talked about his team's defense in the first half.

The third period belonged to the Warriors who outscored the Trojans 9-6 including Tyler Johnson's two trips to the charity strip where he made two out of four free throw attempts. Then Thompson found Begody in the paint for two more points. Begay was able to penetrate the paint for a score and Roland Becenti hit a three-point bucket to cut the Trojans' lead to four points, 33-29.

Valley Christian's Haagsma opened the fourth frame with back-to-back three-point shots. Then Tuba City went on a 6-0 run. The Trojans countered with a 5-0 run of their own and still led, 44-37.

With a little more than aminute left in the game, Tuba City's Begay hit an NBA three-pointer and was fouled after a steal, driving to the basket where he made both free throws, cutting the Trojans lead to two points, 46-44.

The Warriors then fouled Trojans Kasperson who made two free throws to seal the win for Valley Christian, 54-49. The Trojans earned a trip to the finals at Jobbing.com Arena.

"From the second quarter on, they the slowed down the pace of the game - which we didn't want to do," Brown said. "They made us play out (2-3 zone defense) and we had to rely on perimeter shooting, it was tough. We made silly mistakes at the end of the third and fourth period."

"We've got to keep them out of the paint and keep them from making a whole lot of threes," said Justin Smith, Page Lady Sand Devils head coach. "Hope we can run our offense and get some easy shots like we are capable of doing."

Valley Christian Lady Trojans' Brittany Wolph hit an early three-point basket to open the first frame. The Page Lady Sand Devils responded with five straight points from Jordan Kensley, Ember Sloan and Brooke Lister. The game was tied at five all, after a bucket by the Trojans' Mara Kemmer.

Wolph start a 10-point run with a score inside the paint. That score sealed the win for the Lady Trojans, who led 15-5 at the end of the first quarter.

Valley Christian scored at will and led by 20 points in the second period, outscoring Page 16-12. Page's Natasha Henry hit two back-to-back treys to keep the game from getting out of hand, one right before the buzzer. The Trojans led at the break, 31-17.

Valley Christian was unstoppable in the third period - scoring in the paint and hitting perimeter shots - and continued to lead 40-23 at the conclusion of the third frame.

Page put together a 7-2 run to close within 12 points but the lead was too enormous to overcome. From then on, the Trojans were able to cruise to a 14-point victory, 52-38.

The Lady Trojans earned a trip to the semifinal game where they will meet the Window Rock Lady Scouts at Jobbing.com Arena.