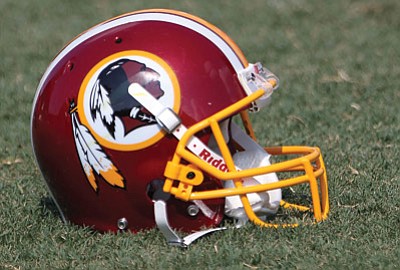 A board of the U.S. Patent and Trademark office ruled that the Washington Redskins can no longer hold trademarks for the team name, saying the term is offensive to Native Americans. Photo/Keith Allison via flickr/Creative Commons

WASHINGTON - The U.S. Patent and Trademark Office agreed July 18 with a Navajo woman's claim that the Washington Redskins name is offensive to Native Americans, thus canceling the team's right to trademark the name.

The Trademark Trial and Appeal board said that evidence presented by Kayenta resident Amanda Blackhorse and four other plaintiffs showed the word "Redskins" was "disparaging" when it was registered, and the team can no longer hold six different trademarks using the term.

The team vowed to challenge the decision, and will continue to hold the trademarks while its appeal is pending. A similar Patent Office decision was challenged and successfully appealed by the team in 1999.

If the team loses its appeal it could still use the name, but third parties would be able to sell Redskins merchandise without infringing on any trademarks.

The trademarks are not the main issue, said Rod Smith, director of the sports law and business program at Arizona State University. The team name is losing in the court of public opinion, he said, and Wednesday's ruling is the latest blow.

"The broader brand itself is now in question as being racist," Smith said. "And that's going to be the issue that drives" the controversy.

The team's lawyers argued that the trademarks had existed for a long time and that owners have invested a lot into the Redskins name. But the board said in its opinion that those arguments did not hold any weight.

Campaigns to change the name have been gaining steam, with political leaders, the National Congress of American Indians (NCAI), the Navajo Nation and other tribes coming out against it.

"We're glad to see that the trademark commission did exactly what we thought they should do," said Jackie Pata, executive director of NCAI, adding that it should be a turning point in the argument against the name.

A letter from 50 U.S. senators in May urged team owner Dan Snyder to change the name, and President Barack Obama said last year he would consider changing it if he were the owner.

Sen. Harry Reid, D-Nevada, a staunch advocate of changing the name, said on the Senate floor June 18 that "the writing is on the wall" for a change after the decision was announced.

The Navajo Nation passed a resolution in April opposing the use of Native American imagery as professional sports mascots. Joshua Lavar Butler, a Navajo councilman, said more tribal members are opposing the name and he called the Patent Office decision welcome news.

"It's more prevalent among the younger generation of Navajos, and even more so from the urban Navajos, the ones living in the city," Butler said.

Despite the pressure, Snyder has been adamant about keeping the name, writing last October that the phrase "Redskin" is not meant to offend anyone, but is rather a "badge of honor."

The Patent Office heard a challenge to the team name before, with a board canceling the trademarks in 1999. But a district court overturned that decision in 2003, saying the evidence could not prove the team name was offensive and, because the first trademark was registered in 1967, the plaintiffs waited too long to file.

The latest battle is still far from over. Bob Raskopf, the team's trademark attorney, said in a statement the team's appeal would succeed because this case is identical to the previous one.

"We are confident we will prevail once again, and that the . . . divided ruling will be overturned on appeal," Raskopf's statement said.

But that appeal was won on a technicality, Pata argued, and this latest opinion is very clear about the name being offensive. The public is also changing its mind, she said, and that change will impact business.