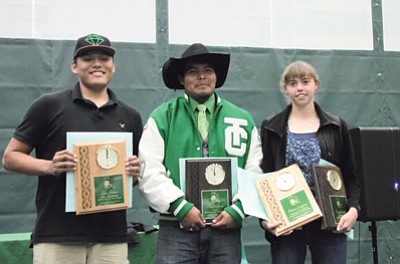 TUBA CITY, Ariz. - Athletes at Tuba City High School are tough. And smart. To play on any team, the school requires good grades - no Ds or Fs. The student athletes also need a strong desire to win and the ability to work as a team.

Trayston Gordy is the Tuba City High School Male Athlete of the Year for 2013-14.

Gordy, Johnson and Loughran were honored during a four-hour sports banquet during the last week of school. Warrior Pavilion was filled with parents, student athletes, coaches and community supporters.

Along with the main student awards, the coaching staff of Tuba City High including cross country, basketball, football, chess, cheer-leading, volleyball, wrestling and softball coaches gave out individual awards to their outstanding players.

"These students and their supportive parents must really commit to an early 7 a.m. to possible 11 p.m. day, when there are away games or competition that is all the way in Phoenix or to other long distance Rez area schools as well as after school practices and any other academic or high school club commitments they might have," Roe said. "Our student athletes must be serious and disciplined if they want to play for Tuba City High and I commend each student athlete for taking on and meeting that challenge."

"It's truly a team effort and Tuba City High does this best," Roe said.