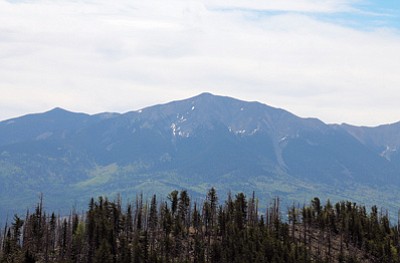 The San Francisco Peaks as seen from Kendrick Trail. The peaks are about 2,000 feet higher than Kendrick Mountain, but when on Kendrick it appears the mountains are the same height. Photo/Stan Bindell

FLAGSTAFF, Ariz. - Wearing an orange shirt can often provoke looks from people whose eyes tell you to tone it down, but orange shirts attract butterflies and hummingbirds.

The lack of moisture this year meant there weren't as many flowers and butterflies out on Kendrick Mountain, but there were some and one butterfly kept flittering around me as if it was asking me to dance. It gives the Butterfly Dance entirely new meaning.

Those who like aspens, ferns and an uphill climb will appreciate Kendrick Trail leading to the top of Kendrick Mountain - the eighth highest mountain in Arizona topping out at 10,418 feet.

The trail up Kendrick climbs 2,450 feet, but the switchbacks are nice and the climb isn't too steep for even moderate hikers. The toughness of Kendrick depends on who hikers want to believe. Phoenix magazine rates the hike as moderate, but the Arizona Republic and the book "Flagstaff Hikes" rate the Kendrick Trail as hard or strenuous.

Kendrick Mountain during the summer is often covered with firecracker red penstemon, lupines and other colored wildflowers, but because of this year's dryness, hikers had to be happy with yellow daisies.

Aside from the wildflowers, the trail is dotted with pine trees, Douglas fir, Engelmann spruce, ferns, aspens and opens into alpine meadows. Stellar blue jays and flickers found along the trail will keep bird lovers happy.

The panoramic view from the switchbacks also made the hike worthwhile.

Not long into the hike, the burned out trees are obvious from the Pumpkin Fire, which burned 15,000 acres in 2000.

Hikers on the trail were sparse except for a group of Boy Scouts and a horseman with a dog.

One highlight of the trail comes not far from the top - a one-room log cabin built in 1912 and used as a home for fire lookouts into the 1930s. For those who want to add miles to the hike, the Bull Basin Trail picks up in back of the cabin.

The lookout tower is about one-quarter of a mile to the west. The view from the tower leaves most in awe. The San Francisco Peaks are to the southeast, but the North Rim of the Grand Canyon and the Painted Desert can be spotted as well along with several other mountains.

The drive in from U.S. 180 is about seven miles, but the roadside is filled with aspens so it gives hikers an inkling of what is to come.

Directions: From Flagstaff drive north on U.S. Highway 180 to Forest Road 245, near milepost 230. Follow 245 for three miles to the junction with Forest Road 171, turn right and follow the signs for four more miles to the trailhead.

Kendrick Mountain Trail - It's all downhill from here
Out and about: See Canyon Trail
Weatherford-Kachina Loop offers big day of hiking
Out and about: hiking the Kachina Trail
Out and about - Green Mountain a plethora of flowers, butterflies and scenic mountain views
Event Calendar