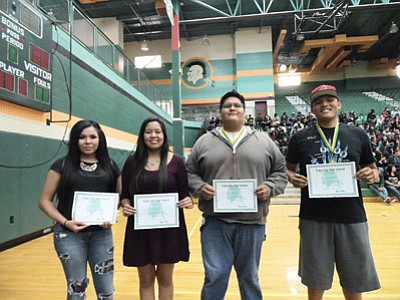 The Bill and Melinda Gates Foundation established the Gates Millennium Scholarship in 1999 with a $1 billion grant.

The idea behind the Gates scholarship, which is awarded to only 1,000 students in the United States, is to fund outstanding academic minority students who show academic promise and potential leadership ability but lack money to continue on to college.

Applicants must provide personal information, their academic record, two endorsements from people in the student's community or city regarding the student's leadership skills and a list of community service projects and activities the student participated in during high school.

The "good through graduation" scholarship will help the students with their undergraduate education and can be used for graduate school and doctoral programs as well.

By establishing the scholarship, Bill and Melinda wanted to "promote academic excellence and provide opportunity for outstanding minority students with financial need to reach their highest personal and educational potential."

Pearl Gore, the daughter of Shirley Furcap and Gwendolyn and Tommy Fowler Jr. is 18 and from the Navajo Nation. She is from the Mexican and Hardrock Greasewood clans. Gore lives in Cameron and commuted by bus to Tuba City each day for school.

Gore will attend Brown University to study pre-med and is already planning for a graduate program.

Gore traveled to Andover, Massachusetts for math and science programs each year of her high school career. Northern Arizona University's Eugene Begay is one of her academic mentors along with Maria Goatcher, an early childhood development teacher at Tuba City High School.

Allen Joe, the son of Ted and Genevieve Joe is 18 and was born and raised in Tuba City. Joe is a member of the Navajo Nation and has been in the Tuba City District from preschool to high school graduation.

His mother is a certified nurse assistant at Tuba City Regional Health Care and his father is a welder who has always encouraged him to study mechanical engineering.

Joe will attend Arizona State University this fall and will major in mechanical engineering. He hopes to attend Cal Tech for graduate school.

Joe said his parents gave him strong motivation to continue to college.

"My dad owned horse and cattle and he showed me how much work and discipline it is to take care of animals on a daily basis," Joe said. "My mom would tell me to treat my homework like a game, so it became a fun kind of activity after school. It wasn't work at all. I owe all my morals and good family values to my parents."

Joe was a member of National Honor Society throughout his high school career and participated in the ROTC program. His former math teacher Mani Rae is who he said gave him encouragement and inspiration and opened his eyes to physics as a career. He also credits Raelynn McCabe, a math teacher at Tuba City High School, for showing him that "math can be fun."

Tyler Johnson, the son of Leandra and Casey Johnson is 17. A member of the Navajo Nation, he was born in Jeddito and was raised initially in Phoenix then moved back to Kaibeto and then to Tuba City in the second grade.

Johnson's mother is a diabetes health educator and his father is an assistant coach at Chinle High School. Johnson will attend University of California at Irvine.

Johnson credits Thom Jones, a teacher at Tuba City High, as his primary academic mentor along with math teacher Imelda Torres as his primary supporters in the Gates application process.

Kamia Yazzie, the daughter of Shirley Bighorse, is 18 years old. A member of the Navajo Nation, Yazzie is planning to attend Northern Arizona University in Flagstaff to study nursing.

Yazzie won numerous awards this year including Navajo Times Player of the Year for volleyball and the Arizona Dairymen's Association All American for volleyball. She was active in Tuba City High's National Honor Society.

Yazzie said her biggest motivator and inspiration has been her family and that Tuba City High School was very supportive and helpful in assisting her with her plans for university life.

Melanie Nez, the final Gates winner for Tuba City High School, was not available for an interview.