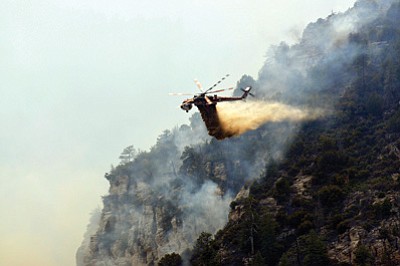 A helicopter battling the Slide Fire in Coconino National Forest which cost $10.2 million to contain as it burned more than 20,000 acres. The fire, which started May 20, was fully contained this week. Mark Brady/U.S. Forest Service

Witnesses before a Senate Homeland Security and Governmental Affairs subcommittee also called for an end to "fire borrowing," the policy of transferring funds from one program account to pay for wildfire-fighting efforts.

The hearing came as crews were wrapping up efforts to stop the Slide Fire, which was fully contained Wednesday after burning 21,227 acres since May 20. That blaze alone took $10.2 million to contain, according to a report by the National Interagency Coordination Center.

Arizona has already seen more than 600 wildland fires so far this year, covering about 85,000 acres, according to the Southwest Coordination Center, an interagency incident support website.

"Arizona and New Mexico are having normal activity," said Hubbard in testimony to the committee. "But it's busy."

He said Arizona should see a decrease in wildfire activity next month, as California, Oregon and Nevada face harsher conditions.

"We'll have surprises pop up all across the West, but those three states look particularly problematic," Hubbard said.

Kevin O'Connor, an official with the International Association of Fire Fighters, suggested a pilot program to train local firefighters to battle wildland fires in high-risk areas.

O'Connor also called for a better understanding of the differences between challenges faced by structural and wildland firefighters. That could better protect fire professionals and prevent events such as the Yarnell Hill Fire, which claimed the lives of 19 Granite Mountain Hotshot firefighters, he said.

Sen. Mark Begich, D-Alaska, chairman of the Emergency Management Subcommittee, said wildfires are increasing as states face drier climates and droughts. He said even Alaska faced a warmer winter, with strong winds and low humidity leading to an early start to its fire season.

According to a document from the Theodore Roosevelt Conservation Partnership, the costs of wildfire suppression have increased at an average annual rate of 22.34 percent since 1985. It said fighting wildfires cost about $375.9 million more each year than was budgeted between 2004 and 2012 - funds that had to be borrowed from other accounts.

Hubbard said that is not likely to change this year.

"Historically federal agencies are given a budget of x million dollars," he said. "When the money runs out agencies are forced to look else where in its budget."

That creates a situation in which the Forest Service has to "rob everyone," Begich said.

But Dougan said that cannot be allowed to continue, which is why it is "so important that we arm firefighters with the training and resources they need."

"Six of the worst fire seasons since 1960 have occurred since 2000," Dougan said. "Recognize that this is the new normal and account for it."