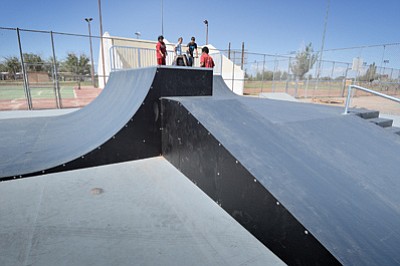 Winslow's new skateboard park opened May 30 at dawn. Located just south of Winslow High School on Cherry Street, the skate park replaces two tennis courts and features 17 obstacles and ramps. The park is open every day from daylight until the curfew hours of different age groups. Some of the ramps and half pipes are as tall as about six feet. The park has a variety of stairs, ramps and rails, which are appropriate for beginners as well as accomplished riders. The park is not the first the city of Winslow has built but it's the most extensive and most resistant to vandalism. The skateboard park is open to everyone, not just Winslow residents