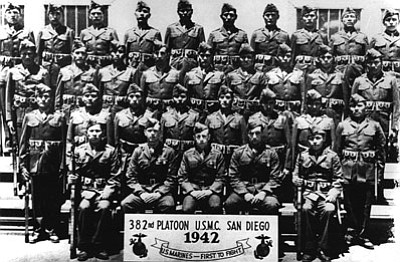 WINDOW ROCK, Ariz.-Flags across the Navajo Nation flew at half-staff last week in honor of the last surviving member of the original 29 Navajo Code Talkers.

"The Navajo Nation has lost our last living treasure, Chester Nez, an original member of the Navajo Code Talkers," said Navajo Nation President Ben Shelly. "We send his family and friends our deepest sympathy and condolences."

Shelly ordered flags across the Nation to be flown at half-staff from sunrise on June 5 through sunset on June 8.

Nez saw combat as a Navajo Code Talker at the Battle of Guadalcanal, Battle of Guam, Battle of Peleiu, and Battle of Bogainville during World War II. He was honorably discharged from the Marine Corps in 1945.

According to Nez's son Michael, he also served in the Marine Corps Reserves and again saw combat during the Korean Conflict.

In 2011, Nez wrote about his experience with co-author Judith Avila in the book, "Code Talker: The First and Only Memoir By One of the Original Navajo Code Talkers of WWII."

"During a time in our Navajo history when our kids were shipped out to boarding school and forbidden to speak their native tongue, these brave men stepped forward to protect our country with their ability to speak Navajo," Shelly said.

Nez was a member of the U.S. Marine Corps 382nd Platoon. The original 29 were the first Navajo Code Talkers to serve the U.S. and they developed the code that would bewilder the Japanese in World War II.

Nez was a member of Chichiltah and Manuelito Chapters. The respective chapters are saddened with the loss of a larger than life hero of the Navajo Nation.

Shelly said the passing of Nez closes another chapter in the annals of Navajo history.

"Chester Nez and the rest of the original 29 now belong to the ages. We salute their valiant service and memory," Shelly said.