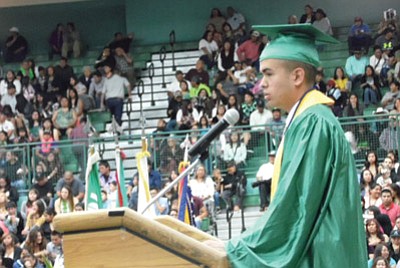 Valedictorian Isaac Manrique and Co-Salutatorians Brianna Loughran and her brother Wesley Loughran gave thought provoking graduation speeches to a capacity crowd in a building that seats 5,000.

Brianna Loughran also was named Female Athlete of the Year for the Tuba City District and Female Academic Athlete of the Year. She is a gifted cross country runner who won several state titles during her senior year. Loughran will attend the University of Rochester in New York in the fall.

Manrique, final GPA of 4.38, was named a Reischaeuer Scholar from Stanford University and a National Hispanic Recognized Scholar. He will study neuroscience when he attends the University of Arizona in the fall.

Wesley Loughran, with a final GPA of 4.35, was vice president of National Honor Society for Tuba City High and will attend the University of Arizona despite earning a Northern Arizona University Lumberjack Excellence Scholars Award. Loughran excelled at Tuba City High in calculus, honors English, construction technology and drawing.

Sakiestewa spoke about culture and discipline and how students must contribute to their own communities once they graduate from college and go onto new jobs or new fields or study.

"How will you give back? To your Nation, to your community, to your tribe and to the larger world?" Sakiestewa asked. "You must think of these things as you pursue a higher education."

Aronlith also spoke of higher goals, ideals and of respect.

"You must respect yourself, your family, your tribe, and finally your own community and the world as well as you go out into the world," Aronlith said. "Don't be lazy, don't be fearful and don't be disrespectful, because it's going to be your turn to set the example and to show others how to take care of this world and our people in it. It's a big responsibility and you must give this careful, kind and considerate thought."

Interim Tuba City High Principal Marilyn Atcitty and Director of Nizhoni Academy Henry Henderson presented the class of 2014 to the crowd in attendance.

An invocation was given in three languages. Mikeala Gamble spoke in Hopi and Trayston Gordy spoke in English.