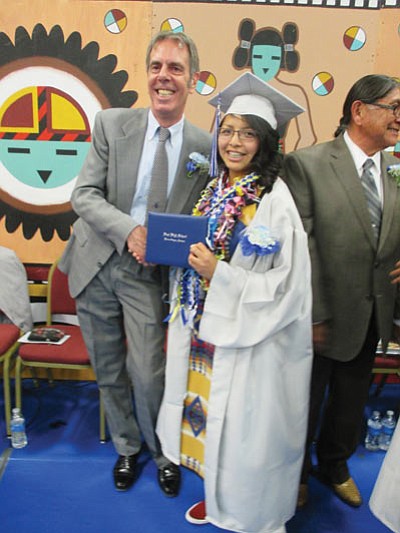 Hopi High Principal Glenn Gilman and  Shynell Begay are all smiles after the Hopi High graduation ceremony May 23. Stan Bindell/NHO

POLACCA, Ariz. - Keynote speaker Wendi Lewis told the 110 Hopi High School graduates that the harder they work the more likely they will have good luck.

Lewis was inspired in high school when she went to Coach Rick "The Legend" Baker's office to see famous sports quotes on the wall, but when she went off to Paradise Valley Community College for the first time she did not do as well because she didn't train during the summer.

"I fell to peer pressure. I was free to have fun," she recalled.

Both her running and her grades faltered. It was three years before she was able to get herself back to her standards of running and she also brought her grades up. By her junior year in college, Lewis was able to beat runners that she hadn't beaten the two previous years.

"Hard work and preparation increases the chances for a positive outcome," she said.

One of her favorite quotes is: "Be careful how you treat people on the way up because you may meet them on the way down." She warned the students that whether they excel in football, basketball or academics that it doesn't mean that college will be easy.

"There is always someone out there who wants to be better. I challenge you to be that person," she said.

Lewis told the graduates that they worked hard to earn their diplomas so they should have fun and celebrate the day, but not stop there.

Lewis said she was glad she was able to come home and help her people. She said although she is working in a different career than her major that she could always go back to that. She praised her mother for helping her and told the students that how they handle tough times matters, because they should use it as learning experience.

Valedictorian Kira Beaudette, who is Navajo, thanked the Hopi community for welcoming her. She spoke about wanting to be valedictorian since she learned the definition several years ago, so she spent many nights studying until 3 or 4 a.m.

"I was tired, but motivation kept me going," she said. "I loved all the extra-curricular activities. I learned how to manage my time and learned organization skills. I kept little notebooks with to do lists."

Beaudette, who will attend Dartmouth, thanked all those who supported her, especially teachers Lavonne Adams and Laverne Lomakema. She also thanked the administrators, guidance counselors, technology department, custodians, security guards and everybody else who helped her.

"Work hard, stay late, be good citizens and active in the community. Apply for scholarships early and don't give up. Learn organizational skills, smile and don't be lazy. Don't be afraid to ask for help," was her advice to her fellow students.

Beaudette, who earned the prestigious Gates Millennium Scholarship, told her classmates to "journey well for the path you take."

Salutatorian Aeon Albert told her classmates that they had only just begun because they will experience triumphs and missteps. She said the potential of her classmates is enormous as she sees doctors, lawyers, artists and criminal investigators in the class.

"I see intelligence, drive and beauty in you," she told her classmates.

Hopi Vice Chairman Alfred Lomaquahu presented her with the Salutatorian Award. He told the graduates he wants to see them all succeed.

"Whatever path you take, be the best you can be. You have the education," he said.

Hopi High Principal Glenn Gilman recounted the many successes of this year's graduates:

*Hopi High football went to state for the first time in 10 years.