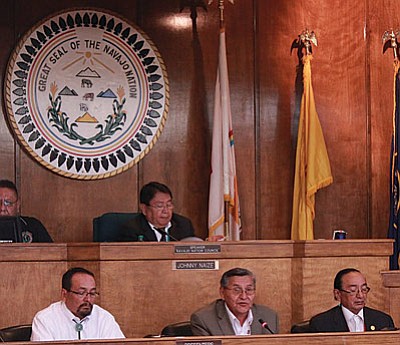 WINDOW ROCK, Ariz. - President Ben Shelly spoke July 21 at the beginning of the 2014 summer session of the 22nd Navajo Nation Council to give the State of the Navajo Nation highlighting education and infrastructure accomplishments from the past quarter.

While Shelly acknowledged that he and the council had not always seen eye to eye, his administration was thankful for the cooperation and support he has received from the council over the past three and a half years.

"Together we have accomplished many great successes on behalf of our Navajo people," Shelly said. "It is important that our three branches of government work together to keep our tribal government moving forward, while strengthening sovereignty and pushing for economic growth."

Shelly said during the summer the potential for forest fires and monsoon flooding is here.

"We must be cautious and be mindful of our elders in need of assistance in the remote areas of the Nation," he said. "Be sure to check up on your elders and see if they need any food or supplies."

Shelly said in mid-June more than 14,000 acres burned on the Chuska Mountains after catching fire near the Asaayii Lake campgrounds. The high wind spread the flames and the Navajo Nation is looking at costs in excess of $8 million to pay for the fire.

"I want to say thanks to the Southwest Region Incident Management Team 3, and the Navajo Nation Department of Emergency Management for assisting us with the fire," Shelly said. "While this fire was devastating, it also opened our eyes to the need for responsibility and fire prevention. Most importantly, it was a time of working together to overcome a challenge facing our Nation. I am proud of the way we banded together to put the fire out in less than two weeks."

Several divisions and departments joined to fight the blaze, including Navajo Division of Transportation, Division of Health, Division of Public Safety, Bureau of Indian Affairs, and many others.

Shelly also said that many people and organizations stepped forward to provide donations in the form of water, food, clothing, and financial contributions. He said those contributions were properly accounted for and distributed in accordance with tribal law.

The Navajo Division of Transportation (NDOT) closed several access roads leading into the Asaayii Lake area during the fire because of concern for public safety and so they could be accessible to firefighters fighting the blaze.

In addition, NDOT worked with the Navajo Nation Department of Emergency Management and other tribal divisions and departments at the Emergency Operations Center to provide updates and maintain communications with chapters affected by the fire.

Shelly also said NDOT is making great progress on other fronts. The division selected Wilson and Company from Albuquerque, New Mexico to assist with the planning and development of priority projects. Included in the scope of work was identifying and developing gravel and borrow pits across the Nation for chapter road projects.

"This is a major accomplishment," Shelly said. "For the first time in history we are moving forward with our own gravel pits instead of relying on outside contractors."

He said the Huerfano Bridge Project is also moving forward. This bridge is a major bus route and the only bridge providing access to and from the community. Funded through the NDOT direct funding agreement with the Federal Highway Administration, this project is in cooperation with San Juan County to replace an outdated bridge. A wider bridge was designed and is under construction. The Bureau of Indian Affairs Transportation Department also contributed funding.

Shelly said the Title IV-E agreement between the Nation and U.S. Department of Human Services Children's Bureau is complete. The Navajo Nation is the first tribe in the country approved to administer the entire Title IV-E Program.

He said the Nation would provide direct funding reimbursements including foster care, guardianship and adoption subsidies.

"Too often, our Navajo children in foster care are put in the care of state agencies," Shelly said. "Their extended families are often unable to obtain guardianship due to financial hardships. This will address that need and provide a stable stream of resources for our kids."

The Division of Social Services also entered into an agreement with the Annie E. Casey Foundation. The Casey Foundation is devoted to developing a brighter future for millions of children at risk from poor educational, economic, social, and health outcomes. Their work focuses on strengthening families and building stronger communities.

"As the Navajo Nation collaborates with the Casey Foundation, we will be focused on keeping kids safe, establishing permanency, and providing kinship placement of Navajo foster children," Shelly said.

Shelly said the Navajo Technical University Navajo Language and Culture Teacher Summer Immersion Program is making progress at improving the technical expertise of teachers at schools on the Nation. This summer, teachers participated in the program and learned about different areas of Navajo language and culture. They also earned six to seven credit hours in the process.

"In Sept. 2011, the Navajo Nation Washington Office informed me the Navajo Head Start was in non-compliance of federal regulations and that a reduction of funds was coming," Shelly said, adding after receiving the letter he immediately met with Yvette Sanchez Fuentes, director of Head Start.

"Ms. Fuentes gave me a letter from the previous administration that stated the Navajo Nation was waiving authority over Navajo Head Start and would instead seek to privatize the program," Shelly said. "I expressed my objection to the position of the previous administration and convinced the director not to accept waiving the authority of the Navajo Nation. We had hard work ahead of us and I knew privatizing the program was not the answer."

"Since that time, we have pushed hard for corrective action measures to be fulfilled for the program and ensuring that Head Start leadership was in compliance with our vision," Shelly said. "Upon hearing the news of passing the federal review, we were happy beyond words."

Shelly said the renewal of the Twin Arrows Navajo Casino Resort's license was issued on May 1 after an April 29 inspection.

The renewal license was issued for a period of one year and complies with the tribal and the state gaming compact. The same day, Twin Arrows opened Phase II of its resort by adding 110 additional rooms to the hotel. Plans for the Twin Arrows bingo hall are moving forward. The resort has received bingo equipment and the procedures for operating the bingo hall have been approved.

"It is only a matter of time before we open the doors," Shelly said.

"The news of the award is cause for celebration, as our Navajo gaming facility and hotel are now the only Four Diamond rated hotel in Flagstaff," Shelly said.

See next week's edition of the Navajo-Hopi Observer for part two of Shelly's State of the Nation address.