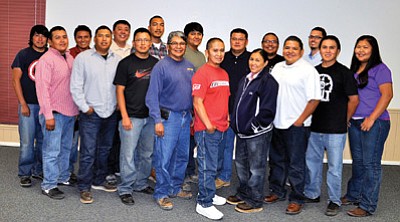 LeCHEE, Ariz. - Any of the 16 new employees at Navajo Generating Station will tell you it's not easy to get a job at the power plant.

The group graduated July 7 from one of the most intense training programs in the energy industry to become regular employees at the Navajo Generating Station.

Several of this class's graduating students have engineering degrees. One has a chemistry degree. Others had years of experience at other power plants, in construction or were recent college graduates. But all agreed with what course instructor Tom Hull told them two months ago when they began.

The program consists of 10 hours a day of classroom lecture and field work four days a week, about three hours of study each night and a weekly test.

At their graduation luncheon, each student expressed a sense of pride and gratitude to their families for support - as much as relief - at his or her successful completion of the training.

Donovan Tsinnijinnie, of Coppermine, said despite having worked at other plants, it was necessary to study at the library, in restaurants or wherever he could.

"I have an aunt who lives here and I just slept on her floor," he said. "I'd just go there for five hours a night and I'd wake up at 4 a.m., go to school and I'd study for basically seven weeks."

The course outline alone is 50 pages long. It includes sections on every aspect of NGS' parts, equipment, procedures and operations; from electron theory to the railroad that delivers coal, from physics to the properties of superheated steam, from the Federal Reclamation Act of 1902 to the history of why NGS was built where it is on the Navajo Nation.

Phillip Bedonie, of Hardrock, said he was working for another company when he heard that NGS was seeking applicants for the class. He made it through the competitive interview and selection process to be invited to the school.

"You could get like four to six different topics and you had to learn that within three days, three nights, and the test was on Thursday," he said. "So definitely the stress was very high, and just to stay afloat, you had to rely on your classmates and your instructors. Sometimes you had to memorize verbatim just so you could pass that test."

Cleveland Shortman is a father of five from Shonto. He said he's been on "the power plant trail" for many years, working on everything from new construction to shut downs.

Like others in the class, his wife and children wanted him to be at home more.

"My wife encouraged me and said, 'You have still enough brain cells left to give it a try and if you pass and go through, you'll be staying home rather than be going out and traveling on the road,'" Shortman said.

He said he recently bought a shed for his tools but his wife moved a desk into it and told him that's where he was going to live for the next seven weeks to study. So he did.

"This is something you go through, and for the rest of your life you'll have a job, security," he said. "It's a once in a lifetime thing."

Michael Tsingine, of Coppermine, said everyone in the class was dedicated and motivated to succeed. He said he worked diligently, calling the class a miraculous life-changing opportunity.

"I did everything I can and so when the opportunity came back up again, I had no option but to pass this class," he said. "If I fail this class, that is just like water running through your hands."

He said he worked two jobs for nine years to provide for his family, which cost him most of the time he had to spend with them. He said his wife Loreal was his inspiration to persevere and succeed.

Mario Gorman of Leupp received his Northern Arizona University civil engineering degree in December. In some ways, he said, this class was tougher than college.

"That was the most writing I've done," he said. "Trying to focus, comprehending what is just being spoken to you, trying to transcribe that and trying to comprehend all that at the same time, you've got to make that effort to push yourself, to learn what's being taught. If you don't do that you fall behind."

Cory Stingley of Holbrook applied after his mom showed him an ad in the newspaper. He, too, wanted to end a succession of jobs on the road.

"I've worked as a pig farmer, I've worked at fast food, I've worked construction, concrete, framing, little bit of roofing, did some dry walling," he said. "And all that wasn't really as complex as this was."