Author discusses sacred places and the outdoors in new book 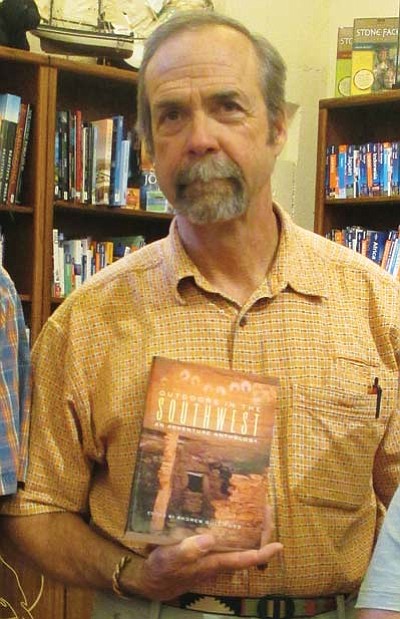 PRESCOTT, Ariz. - Andrew Gulliford uses essays by environmentalists in his book "Outdoors in the Southwest, An Adventure Anthology" to make the case that wilderness areas need to be appreciated and protected.

Gulliford recently spoke to environmentalists in Prescott and Flagstaff about the book.

Barbara Hawke, executive director of AWC, noted that there are 90 wilderness areas in Arizona, so she urged people to be involved in advocacy for public lands.

The essay collection in "Outdoors in the Southwest" includes Terry Tempest Williams, Edward Abbey, Craig Childs and Barbara Kingsolver among many others.

"It's their landscape," Gulliford said. "We want to understand their connection to the land."

Gulliford supports catch and release when it comes to arrowheads just like many fisherman use it toward fish.

"You can pick it up and look at it, but put it back. It's about respect. There are a lot of stories to the land and traditional native uses," he said.

One of his previous books, "Sacred Objects, Sacred Places," is about not hiking in sacred areas.

Gullliford recounted how he once had Hopi Susan Secakuku on one of the river trips and how she helped one of the other women make the Hopi bun hairdo.

Once a year, he takes some of his students out on Lake Powell where they pick up trash on the lake.

"It was like a field school on Lake Powell about garbage. I didn't have to say a word when the students found how much garbage was out there," he said.

Gulliford is appalled that the Navajo Nation sits so close to Lake Powell, but that he has heard there is no swimming pool in Page and no place for youth to learn how to swim. He took one Navajo student, Brandon Francis from Black Mesa, out to Rainbow Bridge. Francis had never been there previously.

Gulliford teaches environmental importance in his classes, but taking the students on outings revitalizes them so they can bring their thoughts back to be practiced on their reservation communities.

While Gulliford uses the essays from other writers, he also interviewed several naturalists for the book and wrote the introduction to each chapter.

"Outdoors in the Southwest" makes the point that people can get into trouble in the wilderness. Ellen Meloy's essay is about her raft getting away and she had to swim after it. Dean Cox wrote about how he was struck by lightning, Arizona author Katie Lee wrote about how she almost didn't get out of a plunge hole at Glen Canyon and mountain climber Fred Hutt fell 900 feet and Leo Lloyd was the helicopter nurse who saved him.

"Wilderness can kill you. We need to think about what we need and what we don't need. We need common sense," he said.

The point is not be scared of wilderness, but knowing that wilderness is about responsibility where there is no one to help you if you run out of water or fall into a cactus.

Gulliford talks about finding oneself in wilderness. One of his students asked why she couldn't find herself at the mall. He replied that the mall is about buying something while the wilderness is about earning something. He clarified that doesn't mean that people can't have fun at both.

"Outdoors in the Wilderness" starts with wilderness and ends up about stewardship.

Gulliford worries that too many youth won't know about wilderness because they spend too much time sitting in front of a computer or TV screen so they don't get out into wilderness.

"It's important that we get more people out in the wilderness so they can pass on that sense of stewardship," he said. "The southwest needs public advocacy so find your place, dig in and advocate."

Gulliford believes in wilderness tithing. Just like some people give tithes to churches, he believes that it is appropriate to tithe something to the environment.

Gulliford also dabbles in politics saying he appreciates President Barack Obama for protecting some wilderness areas by declaring them monuments.

"Why is it that only God can make a tree, but only Congress can make a wilderness area?" he asked.

He also touched on global warming noting that Durango, Flagstaff, Grand Canyon and Hualapai have never been as dry as they are now.

Whether it's politics, tithing or conservation, Gulliford said the future of wilderness and wildland protection depends on the youth.

Gulliford, Ph. D., is a college professor, writer and historian covering the American West. He began writing when he was 14 for the Lamar Daily News in Colorado. He teaches Southwest Studies and history at Ft. Lewis College. He writes and edits non-fiction and personal essays. He writes a monthly column called "Gulliford's Travels" in the Durango Herald.