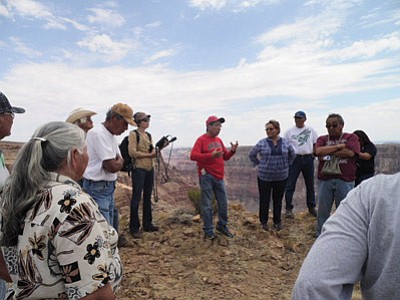 The Confluence is the point where the Zuni River runs into the Little Colorado River and merges with the Colorado River at the bottom of Grand Canyon's northeast end and is located about 35 miles west of Highway 89 and about 100 miles north of Flagstaff. The location is only accessible by off road vehicles.

The proposed 420-acre Escalade Confluence project would cost around $1 billion dollars, according to Confluence President Lamar Whitmer. The project would include a gondola tramway to carry tourists from the edge of the rim to a location at the bottom of the Grand Canyon's Colorado River.

Also included in the Confluence project plans is a river walk, which is a proposed educational sight-seeing experience at the bottom of the Canyon, a Discovery Center -a themed and historical recreation area which would provide entertainment, arts, dining and shopping for tram tourists, lease sites for other hotels and an exhibit and sales area for local Navajos to sell crafts, art and jewelry according to the Confluence Partners' website.

Currently there is not a paved road, electricity or water at the Confluence area.

Proponents of the Confluence project say the tourist development will create much-needed jobs, protect sacred sites and provide rehabilitation of the Bennett-Freeze area.

But many Navajo, Hopi, and Zuni tribal people and the Grand Canyon Trust think differently.

The Hopi, Zuni and Navajo groups consider the Confluence area sacred to their tribes. On June 18, the New Mexico pueblo tribes of San Ildefonso and Acoma Pueblos joined the opposition group.

These opposition groups state that a tourist project like the Confluence project will forever disturb the sacred nature of the Confluence site and that religious activity will be forever hampered for Hopi in its annual salt and religious prayer pilgrimages. Opponents said Zuni ancestral considerations must be considered as well. In addition, opponents said the project would violate the intergovernmental compact between Hopi and Navajo that was signed into effect in 2006.

The original Bennett Freeze, imposed by the United States government in 1966, prohibited any new development, construction, repairs or improvements to existing structures or infrastructure in the 1.5 million acres of that disputed land area.

Hopi leaders said a major tourist project such as the Confluence project would disturb both the privacy and the tranquility needed for such Hopi practices because solace and private tribal relationships with the land and environment are necessary elements of cultural, spiritual and religious well-being.

The Confluence Partners have countered these sacred site claims from the Hopi, Navajo and Zuni on their website which says "we have uncovered no evidence of any sacred sites within the 420 project acre boundaries, or any sites that would be negatively impacted by this project."

The website also states that the National Park Service is required by law to identify and protect Native American sacred places within the park, but does not recognize the Confluence as a sacred site for either Navajo or Hopi.

Still, the project will undergo a complete archeological and cultural clearance process as required by Navajo Codes and Law, which will be submitted to the Navajo Nation Department of Historic Preservation before a final determination is made.

Martha Hahn, chief of science and resource management at Grand Canyon National Park said, "Navajo boundaries do not extend to the Canyon floor."

According to the Confluence Escalade project partnership, the project is not within the boundaries of the Grand Canyon National Park itself. The proposed project is within the boundaries of the Navajo Reservation, which lies in the former Bennett Freeze area - the freeze was lifted in 2009. The Confluence Partners are seeking final approval and possible partial infrastructure funding from the Navajo Nation Council.

Hopi Tribal Chairman Herman Honanie said to the Confluence opposition group on July 18 that he wanted to clarify where the Hopi Tribe stands on the project.

"With the Hopi Council's backing, I and Vice Chairman Alfred Lomaquahu have invited both Navajo Nation President Ben Shelly and their council members to sit down with us at our Hopi headquarters to discuss this Confluence project," Honanie said. "So far Shelly has not even responded in any way to our invitation or even to our formal opposition letters regarding the project sent to his office."

The invitation was also extended to Albert Hale and Whitmer.

"[We invited them to] sit down with us so they can hear why we are so vehemently opposed to any type of tourist development of this kind of our sacred place Sipapuni, in the Confluence, but so far neither Whitmer or Hale have responded," Honanie said.

He added he believes there must be a time where the Hopi, Navajo, Zuni and other tribal religious people are heard on what the Confluence area means to each tribe and how significant and sacred it is.

"Surely, these sacred site considerations must be part of the Navajo Nation project evaluation," Honanie said. "This pristine, spiritual point of origin at the Confluence must be heard."

The deadline for such legislation to be heard and considered for approval was July 8.