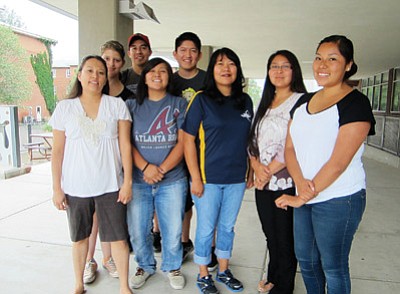 FLAGSTAFF, Ariz. - Students from Northern Arizona University (NAU) will play host to a summer research conference in Window Rock at the Navajo Nation Museum Aug. 5 where they will discuss their research and involvement with different projects on cancer prevention.

The presentation will take place from 2 - 5:30 p.m. and is free with refreshments provided.

About 30 students take part in the Partnership for Native American Cancer Prevention (NACP), where students work in a lab at NAU and at University of Arizona, where an undergraduate biology research program and a Summer Research Institute (SRI) take place, and the Bridges to Baccalaureate (Bridges) program with Coconino Community College, NAU and Dine College. A high school student will present and a few international students will present on projects as well.

The Bridges program is a 10-week program. The NACP projects have been in process for two or three years.

NAU, UACC, and the Hopi, Navajo, and Tohono O'odham tribal communities jointly develop and implement the NACP programs and projects. The programs are designed to bring Native Americans into biomedical research and health care professions while engaging communities in research and training relevant to their needs. The projects include laboratory, field-based, and community-based participatory research.

Janice Wilson, a nursing student, said when she first joined the program from Dine College it was a summer transition and enrichment program called STEP. While she was not interested in research at first, her mentor at Dine College encouraged her to take a lot of science classes.

"After that first summer of doing research, I really liked it," Wilson said. "It was a way for me to get a lot of experience in the lab. It became a lot more interesting to me to have that laboratory background going into the nursing field."

She is interested in nursing research in the future.

Carl Haskie, a Bridges student, works with both Andee Lister, a NAU student who wants to pursue getting her graduate degree and Ali Parks, who is a high school student from Coconino High School, on a sheep project.

Haskie is studying the level of uranium in sheep bones.

"They haven't had any data on that yet," Haskie said. "It's pretty fun."

Haskie works in two separate labs where he preps the sheep bone. Eventually the bone is pounded into a very fine powder where it is put into tubes and into a furnace, which burns away all the living organisms. From there, three different types of acid are applied with the help of an instrument to detect the different trace elements, one of which is uranium.

The sheep bone comes from Leupp and Cameron.

Haskie wants to pursue a degree in environmental engineering and work more with uranium.

Lister said the reason they used Leupp as one of the places to get the sheep from is because there was no uranium mining in Leupp.

"One of the good things about NACP is that you may not be doing the same research but somewhere along the way you help each other out, whether it be school or butchering sheep," Lister said, describing a mass effort to euthanize sheep in Cameron.

She described bringing the sheep back, hanging them to dry out and then burning them to turn them into ash. The students then apply nitric acid. She said that they are at the stage where they are able to run the samples through the instrument to get a reading on how much uranium is there in the bones.

In the future she wants to do community outreach and be a bridge from the science world with all of its technical jargon to the communities where she can explain what is going on in a more community friendly way.

Parks said she always took chemistry and her chemistry teacher encouraged her to apply for the program. She works with Lister and Haskie in Dr. Jani Ingram's lab. Ingram is the director of the NACP and Bridges program at NAU.

"It's been a lot of grunt work," Parks said. "But I am getting more into prepping samples and diluting samples. I did get to run on the instrument which was very cool and very intimidating."

Parks said learning the steps to run the instrument was a lot of pressure but something she is conquering as she works in the lab more.

Amber Poleviyuma is a Bridges student who is interested in public health nursing. She wants to get a Bachelor of Science in Nursing degree and become a registered nurse. She wants to work on making healthcare a little bit more culturally sensitive through public policy.

"I like the preventative care instead of just treating stuff after they have already had it," Poleviyuma said.

This summer she is working with the Center for American Indian Resiliency (CAIR). Her research project is examining the communication and relationships between health care professionals and Native American patients. She also attends conferences to help showcase the work that CAIR is doing and resources they offer.

Ashely Young works with the community outreach program. She provides information about cancer topics to the community. The people seeking the information can be anyone from healthcare providers to people who are diagnosed with cancer.

"I like it because you get to talk to people," Young said. "You get to hear the different stories of where they are coming from, what they have overcome. It is really inspiring."

Young wants to complete a doctorate as a nurse practitioner so she can work at the hospital that is being built in her community in Kayenta.

Adam Bradley is another Bridges student who is studying immunology in Dr. Fernando Monroy's lab. They look at the immune system's response to stress and infection.

"We're looking at the factors and how certain proteins are altered so we can see what infection and stress combined on the immune system is actually doing," Bradley said. "It helps us learn more about our immune systems."

Bradley said he wants to major in computer information systems from the College of Business and wants to continue to study physical chemistry and microbiology.

Young said what is really important is helping out and giving back as much as they can and these programs at NAU are helping each of them do that.

"What we all want to do is to help out our communities as best as we can," she said.