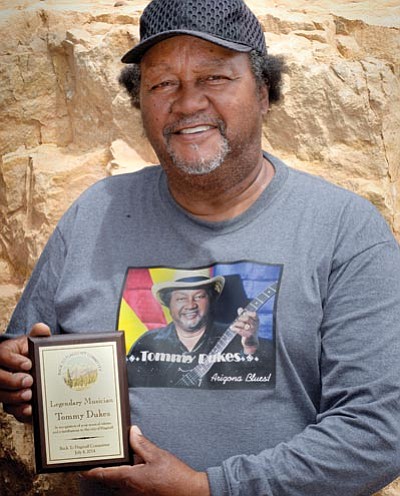 Winslow’s Tommy Dukes displays an award from the Back to Flagstaff Committee. Photo/Todd Roth

WINSLOW, Ariz. - On July 4 the Back to Flagstaff Committee presented Blues maestro Tommy Dukes with an award reading "In recognition of your musical talents and contributions to the city of Flagstaff."

Dukes is a long time Winslow resident and is recognized by the state of Arizona as an important figure in Blues music. He started playing harmonica at age 13, began blues guitar in 1983, in 1992 won first place in the Phoenix Blues Society Talent Contest and in 2007 competed at the International Blues Challenge in Memphis, Tennessee.

On stage, Dukes covers traditional Blues and R&B songs and performs his original songs as well. Dukes entertains Blues enthusiasts all over Arizona. He has also toured the South. More information is available at www.tommydukescom.